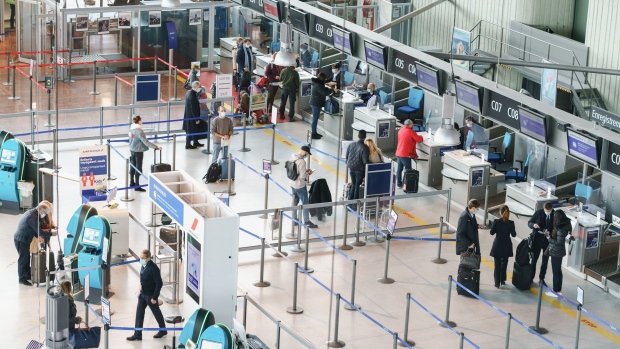 Passengers queue to check-in in the departures terminal at Nice Cote d'Azur Airport in Nice, France, on Friday, Feb. 5, 2021. In France, the government imposed tighter rules on travel in a bid to avoid a third national lockdown. Photographer: Jeremy Suyker/Bloomberg , Bloomberg

(Bloomberg) -- Europe’s top airlines are seeking to overturn European Union compensations laws after being compelled to pay out more than 10 billion euros ($12 billion) in refunds during last year’s coronavirus lockdowns.

The EU261 rule, which sets out reimbursements for flight cancellations and delays, was onerous even before the pandemic struck, executives said at the Airlines 4 Europe’s annual meeting Thursday. They argued that it isn’t compatible with the mass groundings forced on companies during the crisis.

“It’s probably one of the most punitive protection-rights laws in the world,” Air France-KLM Chief Executive Officer Ben Smith said in a joint webinar with the heads of Deutsche Lufthansa AG, British Airways owner IAG SA, Ryanair Holdings Plc and EasyJet Plc. “It’s very important that we move along to evolve this law to something that is more realistic and more balanced.”

Many European airlines sought to rebook passengers to hang on to cash as Covid-19 roiled global travel. While many passengers rescheduled, carriers ultimately had to make payouts to those who demanded it under the EU rule. The European Commission has been mulling revisions to EU261, which was introduced in 2005, for eight years, though changes haven’t been implemented.

“The pandemic has been incredibly tough for airlines but weakening vital consumer rights protections for millions of holidaymakers is completely the wrong approach to solving the industry’s problems,” said Rory Boland, the travel editor for consumer advocacy group Which?

While the group supports greater government support for the airline industry, Boland said the experience of Covid-19, has reinforced the case for reforms “to strengthen passenger rights and ensure airlines and travel operators face real consequences when they break the rules.”

Despite the law, refunds for millions of people were withheld illegally by airlines and travel firms, Boland said.

Regulators have fielded complaints from people who struggled to collect cash refunds for flights they were unable to take. In the U.K., Ryanair and British Airways face an investigation into whether they broke consumer rules by failing to offer customers their money back.

(Updates with comment from consumer advocacy group in fifth paragraph.)