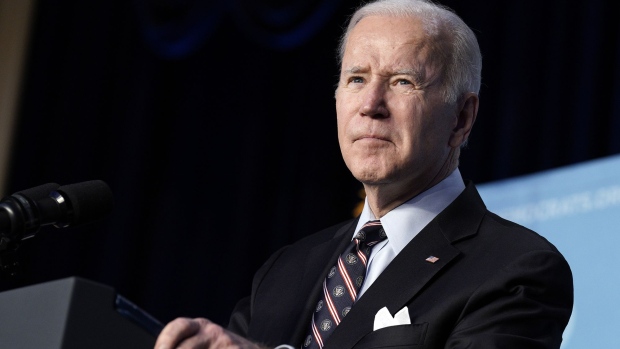 (Bloomberg) -- President Joe Biden lashed out at airlines over “hidden fees” he said took money from Americans already facing persistent high inflation, as he unveiled plans for new regulations that would force air carriers and internet-service providers to be more transparent about charges.

“Junk fees are hitting families at a time when they can’t afford it,” Biden said at a meeting of the White House Competition Council on Monday, detailing efforts by the White House to battle rising costs that threaten Democrats’ prospects in November.

“I’m directing members of the council to sharpen their focus on lowering costs for families,” he said. “This isn’t just some abstract goal, because the problem isn’t just theoretical.”

A proposed rule would require airlines to disclose more information about the fees they charge -- such as those levied on passengers for canceling a trip or parents seeking to sit next to their children on a flight.

Biden said consumers shouldn’t be forced to pay fees to rebook flights, even if the airline had canceled. “Come on, man,” the president said. “It’s just not fair.”

In the agriculture sector, the administration is also proposing to strengthen competition rules in poultry and livestock markets. Biden said major meat processors act as middlemen, controlling the market at the expense of ranchers and consumers.

And he touted expected Federal Communications Commission requirements for internet-service providers to offer a clear breakdown of fees and other charges -- similar to the nutrition label found on food purchased at grocery stores -- to help consumers more easily comparison shop.

“It’s all taking money out of the pockets of average Americans,” Biden said.

The efforts come amid the highest inflation in decades, which has damped prospects for Democrats to keep their narrow control of both chambers of Congress in the midterm elections. A Gallup survey earlier this month found that a 56% majority of Americans say inflation is causing financial hardship for their household, while around eight in 10 Americans rate the economy as “only fair” or “poor,” despite strong employment data.

Biden has planned a series of events throughout the week intended to highlight government efforts to combat rising prices, including one on health-care costs scheduled for Tuesday and a summit on food security planned for Wednesday.

The new airline regulation would require that carriers, travel agents and online-ticket portals display all costs related to baggage options, flight changes and seat selection, the Department of Transportation said in a press release.

“Airline passengers deserve to know the full, true cost of their flights before they buy a ticket,” Transportation Secretary Pete Buttigieg said in the release. “This new proposed rule would require airlines to be transparent with customers about the fees they charge, which will help travelers make informed decisions and save money.”

Buttigieg and the airlines have sparred for months over a surge in flight delays and cancellations as travel resumed rapidly in the aftermath of the coronavirus pandemic. In recent weeks, the Department of Transportation unveiled a new online dashboard that details what services US airlines offer when flights are delayed or canceled -- a move the White House says led some carriers to proactively improve offerings for waylaid passengers.

The White House also said action is expected on an FCC proposal for mandatory disclosure of broadband fees. The requirement will help consumers comparison shop among internet-service options, something that will promote competition and lower prices, the White House said.

Broadband providers, in comments to the FCC, said requiring too many details would confuse consumers and burden companies. Consumer advocates in their comments have said the industry’s current disclosures are incomplete and confusing.