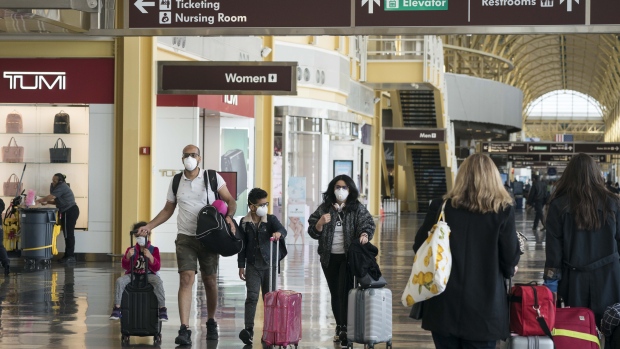 A family wear protective face masks while carrying luggage at the Ronald Reagan National Airport (DCA) in Arlington, Virginia, U.S., on Monday, March 16, 2020. The airline industry, ravaged by plummeting bookings due to the coronavirus, is seeking grants and loans totaling as much as $58 billion from the U.S. government as well as temporary relief from various taxes. Photographer: Sarah Silbiger/Bloomberg , Bloomberg

(Bloomberg) -- OTG, an operator of restaurants and concessions at U.S. airports, is exploring options including a sale or going public through a special purpose acquisition company, according to people with knowledge of the matter.

The New York-based company, which filed to go public in 2016 before delaying plans and citing market conditions, is working with an adviser to solicit interest from potential suitors including private equity funds, so-called strategics and SPACs, the people said. Its targeted valuation couldn’t immediately be learned.

A spokeswoman for Harvest Partners declined to comment and representatives for OTG didn’t respond to requests for comment.