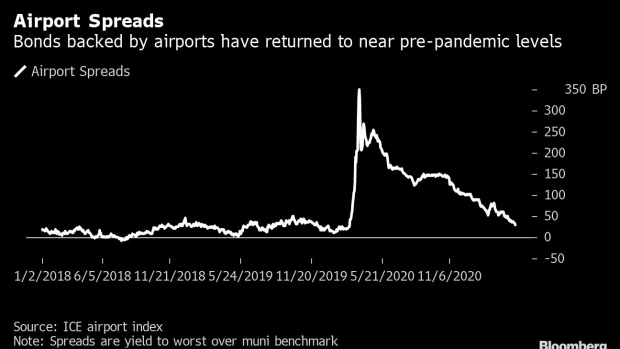 (Bloomberg) -- Bonds backed by America’s airports are rallying back as the Covid vaccine rollout promises to revive the travel industry, marking a rebound for one of the corners of the municipal-debt market hardest hit by the pandemic.

The rally has driven the yields on debt backed by airports down to about 1.2%, or about 30 basis points more than the market’s benchmark, according to an ICE Bank of America index tracking the sector. That marks a dramatic shift from early in the pandemic, when speculation about the deep financial toll of the nation’s shutdowns drove the index’s yield to more than 4% as investors dumped the securities in droves.

The move eliminates what had been some of the rare bargains in the municipal securities market as valuations on top-rated bonds hover near record highs. Junk bonds have climbed, too, pushing the yields back toward the more than two-decade low hit before Covid-19 raced through the U.S.

“During the pandemic, airlines and anything associated got absolutely crushed in terms of spread -- and they stayed wider for a longer period of time than some of the other sectors that were affected,” said Jason Appleson, a portfolio manager at PT Asset Management in Chicago. “In terms of buying opportunity, I’m not sure there is a lot left.”

Airline travel is showing signs of recovery with more than one-fourth of Americans fully vaccinated against the coronavirus. The number of passengers reached a yearly high of 1.58 million in early April, about 68% of the average during the same month in 2019, according to Transportation Security Administration checkpoint travel data.

Last month, Moody’s Investors Service lifted its outlook on U.S. airport debt to stable from negative, citing stronger passenger levels and the impact of federal stimulus measures. Airports received $8 billion in additional funding from the American Rescue Plan, on top of the $12 billion allocated in 2020.

Dan Barton, head of municipal research at Mellon Investments Corp. said that he likes the airport sector because of the expectation of increased travel and the amount of federal aid the facilities got through various stimulus bills.

“When you saw a sector that lost 99% of travel in the early part of the pandemic, and it was debatable how long it would take to recover, it’s not surprising that airports was one of the slowest sectors to recover,” Barton said. “But it has come back very strong.”

BlackRock Inc. analysts led by Peter Hayes said in a note this month that the company is maintaining a preference for sectors that have been more affected by the pandemic, noting travel-related industries like hotels and airports.

Yet there are still some headwinds, with it still unclear how much work-related travel will rebound after a long-run of companies learning to do without it. “The biggest challenge is going to be the return of business travel in a meaningful way,” said Eric Kazatsky, senior U.S. municipals strategist for Bloomberg Intelligence.