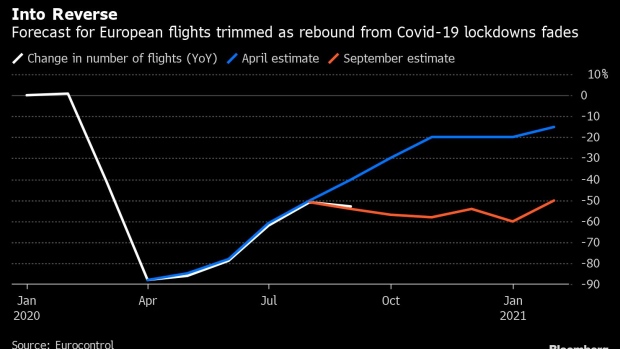 A medic waits for travelers at a Covid-19 testing area inside Athens International Airport, on Sept. 17. , Bloomberg

(Bloomberg) -- A handful of European airports are implementing trials of quick-fire coronavirus tests, working with airlines to push technologies still being developed as a way to revive stunted international air travel.

The tests, which can be carried out in 30 minutes, are seen as the best hope for the aviation industry to overcome new travel curbs that have brought a modest traffic rebound over summer to a shuddering halt. Other initiatives include a Finnish experiment with dogs that can sniff out the virus.

Rome’s Fiumicino hub became the first worldwide to introduce rapid screening, while London Heathrow, Europe’s busiest airport, has trialled three rival technologies. The International Air Transport Association is backing mandatory checks on departure to unlock flights before the arrival of a Covid vaccine, and Deutsche Lufthansa AG wants to use tests to reopen the trans-Atlantic market.

The aviation industry is turning to a do-it-yourself approach after earlier efforts to rally global authorities around a united plan fell flat. A recent surge in virus cases triggered a haphazard set of fresh restrictions, upending a recovery in air traffic. Now companies are working to get pre-flight testing under way in a handful of markets in the expectation that other locations will follow.

“We did not come to this decision lightly,” IATA Director General Alexandre de Juniac said of its support for universal checks. “Systematic testing will present logistical challenges and impact how people travel. But if you look at the reopening of borders, results have been dismally disappointing. Quarantine measures are killing the industry’s recovery.”

The latest global traffic figures show long-haul markets are still largely grounded and that a recovery in domestic and regional operations has leveled off. Restrictions have been especially fluid in Europe, making it impossible for travelers to know whether they’ll need to self-isolate when they return home.

The new efforts focus on rapid antigen checks, which work by detecting Covid-19 antibodies rather than the virus itself, making them quicker and cheaper but somewhat less accurate than established methods. The tests are in final development and should be ready for deployment next month, according to De Juniac, who said all of the trade group’s airline members backed their use.

The endorsement marks a switch away from better-known polymerise chain reaction tests, which have been regarded as the gold standard for Covid testing but which are relatively ill-suited to airport use, taking four or five hours to identify the virus’s genetic markers in a laboratory.

Heathrow, which sought to introduce PCR tests costing 150 pounds ($191), had also proposed a second test five days later to allow for the virus’s incubation period, during which time people would need to self-isolate. Britain declined to ratify the plan, saying it was unlikely to entice travelers put off by an existing 14-day quarantine period for arrivals from at-risk countries.

The airport is now pressing the case for rapid testing before departure, though Chief Executive Officer John Holland-Kaye cautioned Wednesday that it will be “more challenging” for the model to gain acceptance, since destination countries would need to take the accuracy of the checks on faith.

The month-long Italian trial being conducted by Aeroporti di Roma SpA so far involves domestic-only services operated by state-owned Alitalia SpA between the capital and Milan Linate airport. Passengers on certain flights must take a rapid antigen test, with the cost covered by the Lazio regional government.

The tests require would-be travelers to provide a swab, with the results available in 30 minutes. People can also board the flights if they’ve been screened the day before at a drive-in center at the airport, or if they’ve undergone a PCR check in the previous 72 hours.

Anyone found to be infected is denied boarding and will have to return home to self-isolate, having previously completed a form undertaking to do so in the event of a positive outcome.

AdR said it’s in talks with Lufthansa, Russia’s Aeroflot and Dubai-based Emirates about introducing the tests for their flights from Fiumicino. It’s also keen to offer the procedure for services to New York, restoring a vital trans-Atlantic link that’s currently closed to all but repatriating passengers.

Lufthansa said separately Tuesday that it’s planning to buy test kits from manufacturers including Roche Holding AG, after the Swiss company said the day before that its rapid antigen scan was available in Europe and that it would be filing for emergency authorization in the U.S. The German carrier said it’s working with partners to use the tests to open up American routes.

De Juniac said mass antigen tests would cost only about $10 once universally available and that he’d expect governments to fund them. Airport employees could carry out the screening without specialist medical training and results would be available within 15 minutes, with a 97% sensitivity, he said.

The IATA head said that the rapid tests could be deployed alongside PCR checks, which could remain available for passengers wanting to be screened ahead of travel.

One, devised by GeneMe of Poland, can detect the Covid-19 genome in nose or throat swabs in about 30 minutes, while the other, from U.K.-based Mologic, uses a saliva sample to identify viral antibodies in about 10 minutes.

The hub also tested the less conventional Virolens system from British startup iAbra, which deploys a digital camera and microscope to produce a highly magnified hologram-style image of a sample in just 20 seconds. That can then be scanned for the distinctly shaped virus using artificial intelligence software.

Faster even than the optical scan, Finland is deploying dogs at Helsinki airport that have been trained to hone in on people carrying the virus in just 10 seconds by sniffing a skin wipe. The service is voluntary and targeted at arriving passengers.

Virgin Atlantic Airways Ltd. CEO Shai Weiss said in an interview that rapid testing holds out hope of a near-term revival for long-haul specialists such as his own, which usually deploys 70% of capacity across the North Atlantic.

“If we knew that there’d be a quarantine by March we might be able to hunker down, but there’s no guarantee of that,” he said. “Testing is the only way of getting aviation moving and allowing the economy to take off.”