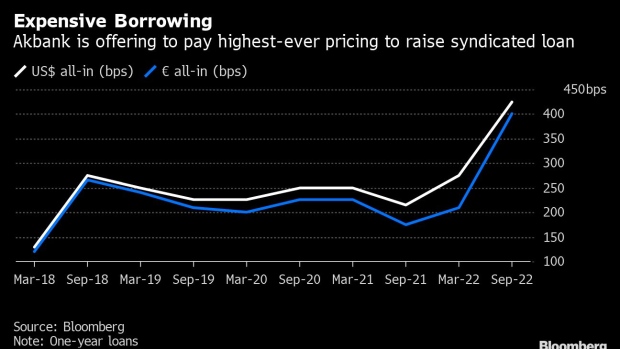 Customers use automated teller machines (ATM) operated by Akbank TAS, center, and, Turkiye Garanti Bankasi AS, right, in the Besiktas district of Istanbul, Turkey on Wednesday, Oct. 9, 2019. The lira hovered near its lowest level since late August against the dollar while stocks and government bonds fell as the threat of U.S. penalties mounted after a Turkish military operation in northeast Syria got underway. Photographer: Kerem Uzel/Bloomberg , Bloomberg

Akbank T.A.S is offering lenders improved returns on its upcoming October dual-currency loan, making it the most expensive loan ever for the Turkish lender, after global borrowing costs rose and major rating firms cut the sovereign’s credit grade.

The bank is expected to pay all-in costs of 425 basis points over Secured Overnight Financing Rate, or Sofr, and 400 basis points over Euribor, according to people familiar with the matter who aren’t authorized to speak publicly and asked not to be identified.

“The cut in Turkey’s sovereign credit ratings and following rise in CDS rates have an impact in rising costs,” Akbank said in an emailed statement to Bloomberg.

The new loan will be tied to similar sustainability targets as previous facilities including energy sourced from renewable sources and renewing expiring credit cards with recycled ones. The bank’s existing loan is currently being offered at 500-700 basis points in the secondary market.

The higher cost of borrowing comes as credit rating firms Fitch Ratings and Moody’s Investors Service cut the country’s sovereign ratings further into junk in the last 12 months as ultra loose monetary policy contributes to spiraling inflation and depreciation of the currency.

Lira has tumbled 28% against the dollar this year, making it the second worst performing currency after Argentinian peso among emerging market peers. President Recep Tayyip Erdogan’s insistence on low interest rates despite runaway inflation has been weighing on the country’s risk premium ahead of next year’s elections, with Turkey’s five year credit default swaps hovering over 800 basis points.

“We may see some banks that have a short-term or opportunistic approach to Turkish markets not taking part in the new facility,” Akbank said. “However, we expect banks that we have major relations with to continue participating in our syndications.”