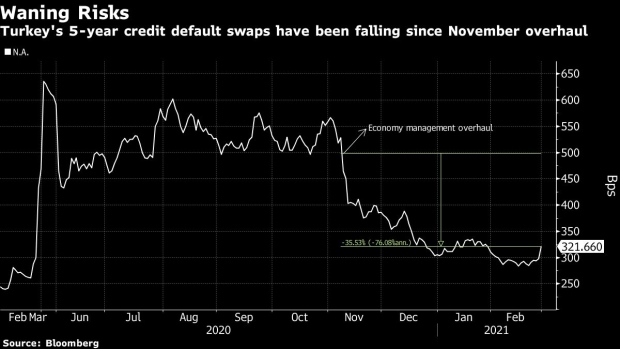 Customers use automated teller machines (ATM) operated by Akbank TAS, center, and, Turkiye Garanti Bankasi AS, right, in the Besiktas district of Istanbul, Turkey on Wednesday, Oct. 9, 2019. The lira hovered near its lowest level since late August against the dollar while stocks and government bonds fell as the threat of U.S. penalties mounted after a Turkish military operation in northeast Syria got underway. , Bloomberg

(Bloomberg) -- Akbank T.A.S. is seeking to cut its foreign borrowing costs as it kicks off a wave of refinancing among Turkish lenders trying to take advantage of a drop in the country’s risk premium.

Turkey’s second-largest commercial bank by market value is looking to raise about $650 million via a 367-day syndicated loan to replace a facility of the same tenor it arranged last March, according to a person familiar with the matter, who spoke on condition of anonymity.

Istanbul-based Akbank is offering a 175 basis-point margin on a dollar tranche and 150 basis points on a euro portion, compared with the 190 basis points and 165 basis points on the existing deal, the person said. The lender paid 35 basis points more on dollar and euro facilities when it raised a loan of around $800 million in October.

Akbank may set the tone for other Turkish borrowers by becoming the country’s first bank to tap international markets for a syndicated loan this year, with those that follow expected to mirror the lender’s pricing.

It’s testing the appetite of creditors after Turkey’s risk premium dropped following an overhaul of Turkey’s top economic policy team in November and its adoption of a more market-friendly approach. But jitters have returned to Turkey last week as the lira led declines among its peers in emerging markets during a period of rising U.S. Treasury yields.

Turkey has delivered substantial interest-rate hikes since the appointment of Naci Agbal as central bank governor and his ally Lutfi Elvan as treasury and finance minister. The moves have spurred a 15% rally in the lira as expectations grow that the country is returning to more orthodox monetary policy.

The cost of insuring against a Turkish default -- as measured by its five-year credit-default swaps -- has declined to around 300 basis points, from about 566 basis points in early November. In February, Fitch Ratings kept Turkey’s sovereign credit ranking unchanged while revising its outlook to stable, a decision it said reflected the easing of near-term external financing risks.

“Fitch upgrading Turkey’s outlook to stable from negative and other positive expectations about our country support our efforts to lower the rates,” Akbank said in response to questions from Bloomberg.

Although it didn’t provide any details of the deal, the bank suggested it could pave the way for other Turkish lenders seeking syndicated loans “to get better interest rates in the upcoming period.”