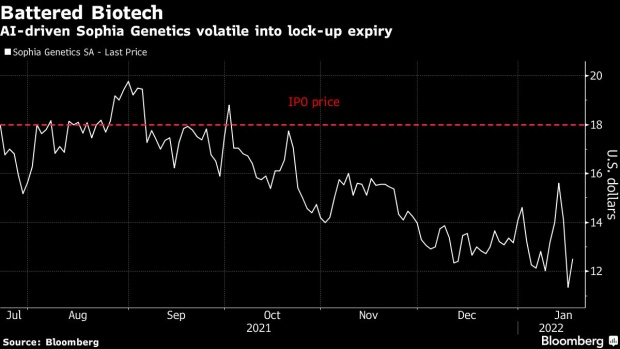 (Bloomberg) -- Sophia Genetics SA touched a record low on Wednesday before ending the day up 10% after early investors in the artificial intelligence company got their first chance to sell.

The stock swung between a low of $10.21 on Wednesday, before bouncing higher to end the day up 10% at $12.51 after a 180-day lockup period on the shares expired, giving investors in the initial public offering a chance to cash out of the pummeled biotech.

Former Vice President Gore’s sustainability-focused investment firm declined to comment on their plans for the stake in Sophia, which uses AI for discovering new drugs, while Alychlo and another top holder Balderton Capital didn’t respond to emailed requests for comment.

Peers include Exscientia PLC, AbCellera Biologics Inc. and Absci Corp. All four companies went public in the past 14 months and only Exscientia is trading a mere 5 cents above its listing price after forging a deal worth up to $5.2 billion with Sanofi. The sector gets caught up in the rotation away from high risk/high reward growth stocks.