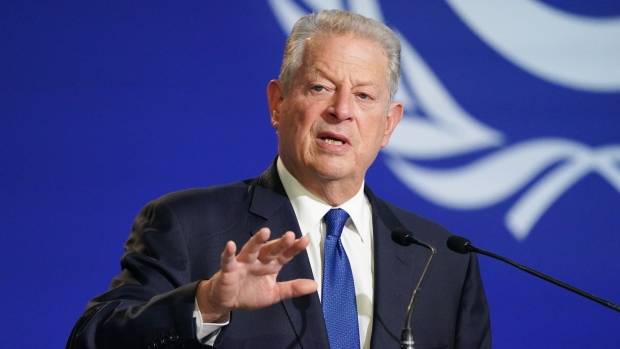 GLASGOW, SCOTLAND - NOVEMBER 05: Al Gore speaks during the "Destination 2030: Making 1.5C A Reality" event on day six of the Cop 26 Summit at the SEC on November 05, 2021 in Glasgow, Scotland. Today COP26 will focus on elevating the voice of young people and demonstrating the critical role of public empowerment and education in climate action. The 2021 climate summit in Glasgow is the 26th "Conference of the Parties" and represents a gathering of all the countries signed on to the U.N. Framework Convention on Climate Change and the Paris Climate Agreement. The aim of this year's conference is to commit countries to net-zero carbon emissions by 2050. (Photo by Ian Forsyth/Getty Images) , Photographer: Ian Forsyth/Getty Images Europe

(Bloomberg) -- Al Gore, the former US vice president turned climate activist, said investors are growing increasingly impatient with evidence of potential “greenwashing” amid signs that net-zero pledges made by some members of the financial industry weren’t credible.

Gore, who spoke in an interview just before Climate Week in New York got under way last week, said commitments made by members of the No. 1 green club for bankers and investors -- the Glasgow Financial Alliance for Net Zero -- are “very welcome” and “not meaningless.”

“But obviously they have to be followed up,” he said.

GFANZ, which counts roughly 500 members representing more than $135 trillion in assets, was hailed as a milestone at the COP26 climate summit last year. But now, “it’s become apparent that some who made impressive pledges did not immediately begin to put in place a practical plan to fulfill those pledges,” Gore said.

“Investors and others are sniffing out greenwashing more readily these days,” said Gore, who chairs Generation Investment Management. “And the pressure is going to grow.”

Against that backdrop of growing scrutiny, GFANZ has now seen its first official defections. Bundespensionskasse AG, an Austrian pensions firm, quietly exited last month, according to the GFANZ unit to which it reports. And the departure of A$70 billion ($46 billion) Construction & Building Unions Superannuation Fund, known as Cbus, was made public earlier this month by the sub-alliance to which it belonged.

“We made the difficult decision to focus our resources on our internal climate change activities,” a spokesperson for Melbourne, Australia-based Cbus told Bloomberg. “We support the important work that the alliance is doing and wish all members the best in their endeavors.”

GFANZ has sought to build credibility while remaining a voluntary alliance without binding rules that might frighten off members. But as it tries to introduce stricter standards, cracks are becoming visible. For some members there’s a growing realization that they may fail to meet the goals set out by the alliance, while others have expressed fear the organization’s requirements for decarbonization could make them legally vulnerable.

Last week, it emerged that Wall Street heavyweights JPMorgan Chase & Co., Bank of America Corp. and Morgan Stanley were considering a possible exit from GFANZ. That was followed by a clarification of the GFANZ criteria, giving financial firms scope to set weaker fossil finance targets, and ostensibly easing tensions behind the scenes.

For some, the development was a red flag. It “calls into question how genuine their commitment was to net zero in the first place,” said Jeanne Martin, head of the banking program at ShareAction, a nonprofit that promotes responsible investment. “Ultimately, this is indicative of the limits of leaving urgent climate action up to banks and other voluntary initiatives.”

Rebecca Self, a former senior banker at HSBC Holdings Plc who now runs Seawolf Sustainability Consulting, said GFANZ members appear to be realizing that “it requires more than an initial commitment and nice words.”

“For net zero initiatives like GFANZ to work well, they require credibility beyond the initial commitment and fanfare,” she said. “This includes transparency such as routine progress reporting and verification, including disclosing the financing of fossil fuels.”

In an interview with Bloomberg Television’s Francine Lacqua, Carney played down the risk of defections and said Race to Zero, the UN-backed net-zero project that underpins GFANZ, had gone “too far” with recent requirements for more stringent decarbonization targets. Race to Zero has since updated its language and emphasized that members must “independently find their own route” to the 1.5 degrees Celsius-aligned climate goal.

Cbus didn’t cite concerns around legal risks for its departure from GFANZ. Instead, it listed the administrative burden involved in staying. That’s as developing regulations and standards require signatories to meet parallel frameworks.

For some, these hurdles have led them to snub GFANZ from the get-go. Blackstone Inc., Apollo Global Management Inc. and KKR & Co. Inc. are among private equity giants that judged GFANZ membership an unnecessary burden. Insiders, on condition of anonymity, have referred to the near-impossibility of coming up with credible plans to eliminate their carbon footprints by 2050 as reason enough to avoid GFANZ and its sub-alliances.

Self says it’s now “evident the voluntary approach to the climate action will not work.”

“The cost of these climate related extreme events to the global economy was $2.5 trillion, an increase of $1 trillion over the previous 10 years,” he said. “And because we’re continuing to add another 162 million tonnes of man-made global warming pollution every single day to the troposphere, of course it’s getting worse.”

The accumulated greenhouse gas pollution “in the thin shell of atmosphere surrounding our planet, which we’re using as if it’s an open sewer, now traps as much extra heat every day as would be released by 600,000 Hiroshima class atomic bombs exploding every 24 hours,” Gore said. “It’s quite literally insane. We have to change!”

(Adds Gore comment on cost to the environment of bogus climate pledges, in final paragraphs)