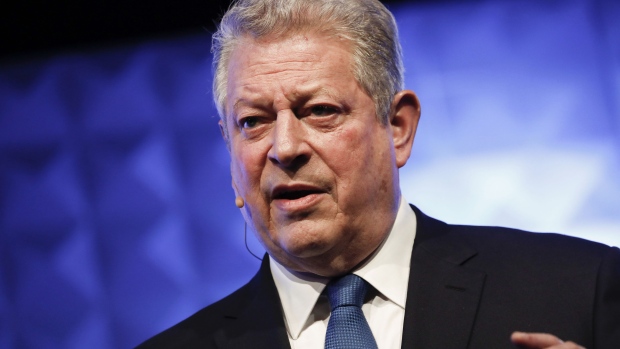 (Bloomberg) -- Vanguard Group Inc.’s decision to leave the world’s largest climate-finance coalition was slammed by former US Vice President Al Gore, who said the move was out of step with the growing awareness among business leaders that they can no longer afford to ignore global warming.

Gore, who chairs Generation Investment Management, one of the world’s biggest sustainable investing firms, called the move “extremely disappointing” during an interview in San Francisco. “It’s an irresponsible and shortsighted decision.”

Vanguard, the second-largest US fund manager with about $7.1 trillion of assets, said Wednesday it was quitting the Net Zero Asset Managers initiative after a “considerable period of review.” The group is part of the Glasgow Financial Alliance for Net Zero that was brought together last year by former Bank of England Governor Mark Carney, and its members oversee a combined $150 trillion in assets. Vanguard’s exit marks the coalition’s largest defection to date and comes amid growing attacks from US Republicans against banks and asset managers deemed unfriendly toward the fossil-fuel industry.

A spokesperson for NZAM said it was “unfortunate that political pressure” had led a major alliance member to walk out. Vanguard said the decision “won’t affect our commitment” to helping investors “navigate the risks that climate change can pose to their long-term returns.”

Gore, whose status as a climate crusader was cemented by his 2006 documentary, An Inconvenient Truth, said he sees “a real, growing commitment” among corporate executives to fight climate change. “Unfortunately, it’s not everywhere. The leadership of Vanguard isn’t a part of it,” he said.

Vanguard’s departure follows scathing criticism of the Net Zero Asset Managers initiative for failing to ensure its members were on track to meet their targets. In October, the think tank Universal Over said the project was “irrevocably flawed” after finding that members were using inconsistent methodologies that were both vague and non-binding. It singled out Vanguard, BlackRock Inc. and State Street Corp., the world’s three biggest asset managers, for its harshest criticism.

Vanguard, which generates much of its fees from index-tracking funds, suggested that it was no longer feasible to try to curtail its investment model in a way that was compatible with net-zero goals. For example, the $511 billion Vanguard 500 Index Fund, which mimics the S&P 500, has about 5.1% of its assets in energy companies and another 3.3% in utilities.

In its statement Wednesday, Vanguard said that industry initiatives such as the net-zero alliance “can advance constructive dialogue, but sometimes they can also result in confusion about the views of individual investment firms. That has been the case in this instance, particularly regarding the applicability of net-zero approaches to the broadly diversified index funds favored by many Vanguard investors.”

The extent to which index funds, or passive investment strategies in general, can be modified to meet net-zero goals has long been a point of contention in the asset management industry. Earlier this year, the United Nations-backed Science Based Targets initiative said asset managers should no longer be free to exclude all passively invested funds when estimating their carbon footprint if they want their net-zero goals verified.

Vanguard said it “will continue to provide investors the information and products they need to make sound investment choices, including products designed to meet net-zero objectives.” The firm added that it also will continue to “publicly report on our efforts with respect to climate risk.”