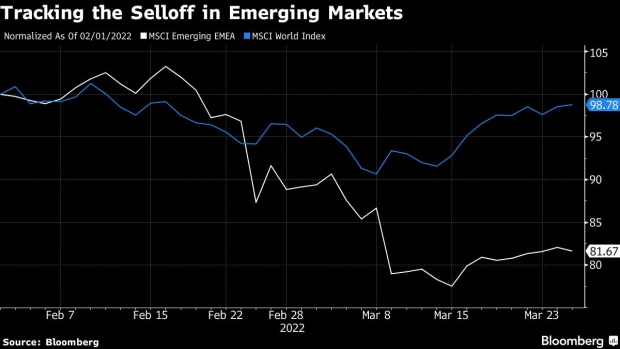 (Bloomberg) -- Generation Investment Management LLP is warning of the risks associated with a broad-based retreat from emerging markets, as Russia’s war on Ukraine leaves some investors rethinking their exposure.

The $40 billion asset manager, which was founded by former U.S. Vice President Al Gore and David Blood, a long-time Goldman Sachs Group Inc. executive, is urging sustainable investors in particular to keep funding developing markets. Generation, a pioneer in green finance, says the world can’t ignore the threat such a withdrawal would pose to the race against climate change.

“We mustn’t lose sight of the bigger picture,” Edward Mason, a director at Generation Investment Management, said in an interview. “There’s a much broader problem of insufficient capital going into emerging markets and developing countries for the transition” toward low-carbon economies.

Countries accused by nonprofits such as Amnesty International of human rights abuses and corruption are among those most exposed to the fallout from climate change. They’re also among those to have seen the biggest selloff this year, with the MSCI index for the Middle East, Africa and emerging Europe down more than 15%, on track for its worst quarter since the onset of the pandemic. That’s almost three times the decline in the MSCI World Index.

Investors pursuing environmental, social and governance goals may be particularly sensitive to the new geopolitical world order. In a recent note to clients, analysts at JPMorgan Chase & Co. wrote that the “Ukraine-Russia conflict may bring back to the fore the issue of how ESG investors manage investments in regions with governments of non-democratic and hybrid regimes.”

In its latest assessment, the United Nations Intergovernmental Panel on Climate Change said the private sector isn’t sending adequate funds to the developing world. In fact, current financing needs to be as much as six times the current level, if the planet is to keep warming within the critical threshold of 1.5 degrees Celsius, the IPCC said in February.

Generation’s Mason said climate finance needs to go to corners of the globe furthest behind in their transition to cleaner energy forms, if the world is to move away from fossil fuels.

“We have to find ways to deliver more private capital to emerging markets and developing countries for the transition,” he said. The right mix of public and private money, known as blended finance, “is going to play an important role, as the risk-return-impact calculus has to be right for private finance,” he said.

Ultimately, Russia’s invasion of Ukraine has laid bare the unsustainability of a continued reliance on oil, gas and coal, Mason said. The war is “just another reason to end our addiction to fossil fuels,” he said.