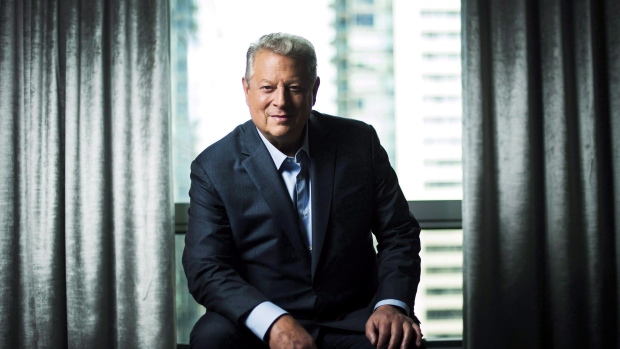 Al Gore poses for a photograph before talking about his new film "An Inconvenient Sequel: Truth to Power" in Toronto on Friday, July 21, 2017. , THE CANADIAN PRESS/Nathan Denette

“The world becomes steadily more aware of how dangerous it is to keep loading up the sky with this global warming pollution – using the sky as an open sewer. We can’t do that anymore,” Gore told Toronto-based CP24 in an interview on Friday.

Gore made the comments in relation to a question about the future development of Canada’s oil sands. In recent days numerous energy CEOs and investors have told BNN higher taxes and stricter regulations are prompting them to reduce their exposure to Canada’s energy sector.

Gore also acknowledged that investors appear to be souring on the oil sands. “Some investors have pulled out; I know it’s a big economic chip to play for Alberta and for the country,” he said.

He said on Friday the energy industry is wrestling with the transition to a greener economy. “Fossil fuel companies understand that the demand for their product is going down as more people take advantage of the sharply reducing prices for renewable electricity.”

It is not the first time Gore has slammed the oil sands. Similar comments about Canadian energy companies using Alberta as an “open sewer” in 2013 drew the ire of then-Natural Resources Minister Joe Oliver.

While Gore slammed the oil sands, he praised Canada’s stance on climate change. He singled out the contribution of Prime Minister Justin Trudeau in helping to pass the Paris Climate Accord. In June, U.S. President Donald Trump announced his intention to withdraw from the agreement.

“I think overall Canada has turned in the right direction,” Gore said. “I don’t agree with everything your Prime Minister is doing; but, I have to say, he has been such a breath of fresh air. During the negotiations in Paris he made a huge positive difference.”