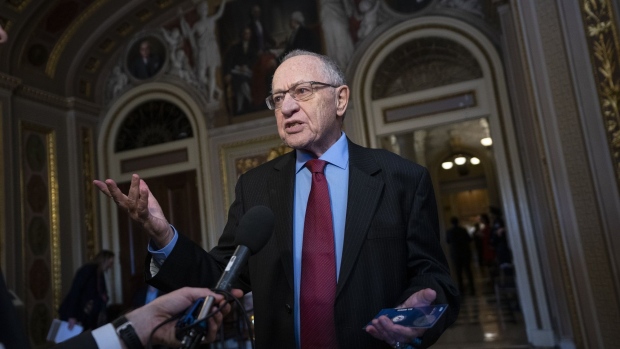 Alan Dershowitz, lawyer for President Donald Trump, speaks to members of the media at the U.S. Capitol in Washington, D.C., U.S., on Wednesday, Jan. 29, 2020. Senators will spend the next two days grilling President Donald Trump's defense team and House impeachment managers, with Senate Majority Leader Mitch McConnell trying to salvage his plans for a quick trial, which hinge on a pivotal vote on witnesses that could be held Friday. , Bloomberg

“The number of people the former president reached through social media was staggering,” Dershowitz said in a statement filed by Trump Wednesday in federal court in Miami. “Democracy demands a level playing field.” The lawyer isn’t representing Trump in his lawsuits against the companies.

Dershowitz, 83, said in his filing that he has only voted for Democratic presidential candidates since the 1960s. Even so, he said that without a court order favoring the leader of the Republican Party, “it is likely that the censorship imposed by Facebook and Twitter will impact the 2022 elections.”