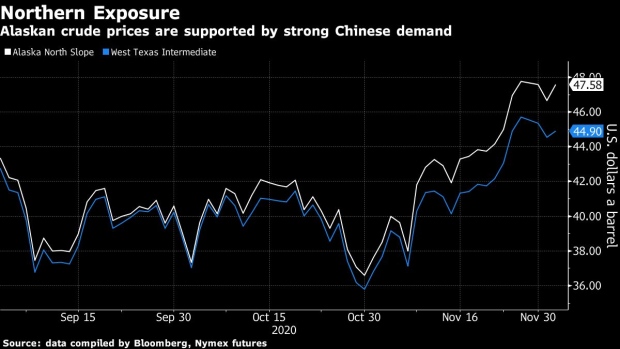 (Bloomberg) -- China’s appetite for energy is saving oil producers in Alaska from a pandemic-driven collapse in demand on the U.S. West Coast, with shipments from the Last Frontier to the Asian nation on a tear.

The state is set to export the most crude in two decades, with volumes more than doubling from last year to 15.6 million barrels so far in 2020, according to Paris-based commodities research firm Kpler. The bulk of it is going to China.

“Alaska North Slope crude is typically sent to refineries along the U.S. West Coast, but with the pandemic significantly slashing demand for oil in the region, Chinese buyers capitalized on the surplus,” said Emmanuel Belostrino, a Kpler crude market analyst.

China was struck early by the coronavirus and imposed strict measures to control its spread much faster than Western countries. Now, Asian demand is helping support physical markets from the U.S. to the North Sea, while places like California struggle with a new surge of the virus.

Alaska North Slope crude jumped 30% last month thanks to the rising exports, and it’s trading near its highest since March, at $47.58 a barrel on Wednesday. The oil is selling at a premium to West Texas Intermediate crude futures.

A fleet of about 20 tankers carrying U.S. crude is expected to leave for Asia this month.

More than a dozen oil tankers have left Alaska for China since the pandemic struck the U.S. The Bahamanian-flagged Zenith Spirit is currently sailing back to the state’s export terminal of Valdez after sailing to China from Alaska in October. As a non-U.S. flagged tanker, it can’t be used to deliver oil to U.S. ports. Other tankers including Dilong Spirit, Stena Sunrise and Alaskan Navigator have left Alaska for Asia since September.

Alaskan crude was excluded from a U.S. oil export ban that wasn’t lifted until 2015. The state shipped a sizable amount of oil abroad until 1999, when North Slope production declined sharply.