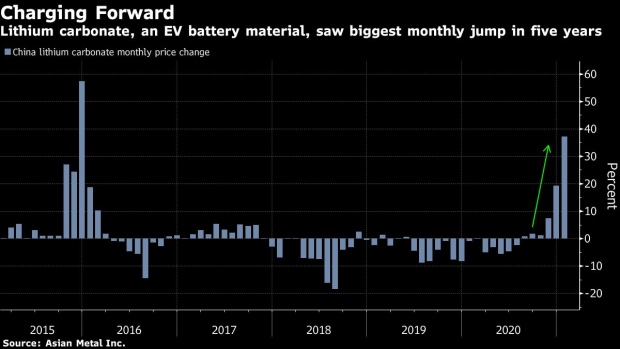 (Bloomberg) -- Albemarle Corp. has earmarked almost all the proceeds from a $1.5 billion equity offering to expand its lithium capacity as the global battery boom gathers momentum.

Already the world’s biggest lithium supplier, the Charlotte, North Carolina-based company will allocate about 90%, or $1.35 billion, of a bigger-than-planned capital raise to expand operations in Chile and Australia and processing plants in China, Chief Executive Officer Kent Masters said.

Producers of the key ingredient in rechargeable batteries are starting to ramp up amid signs the market is finally recovering from a glut. Chinese spot prices of the soft, slivery white metal have rebounded this year as a wave of green-vehicle targeting boosts demand prospects. Ford Motor Co. announced last week that its passenger-vehicle range will be all-electric in Europe by 2030. General Motors Co. plans to sell only zero-emission models by 2035.

“It’s difficult to predict, but we’re pretty confident that demand will outstrip supply as we get to the end of the year,” Masters said in an interview.

BloombergNEF expects supply of lithium hydroxide, or battery grade lithium, to be tight this year and prices to rise along with battery consumption. It also expects lithium demand to grow almost eight-fold by 2030 from last year’s levels. Albemarle lifted its demand forecast by 14%, and now expects it to exceed 1.1 million tons by 2025 from about 300,000 tons now.

The electric-vehicle proclamations by manufacturers combined with existing favorable subsidies and regulations in Europe and China mean “the demand side is very encouraging,” said Eric Norris, Albemarle’s head of lithium.

The company, which also has bromine and catalyst operations, plans to spend the money from the capital increase in the next three to four years to bring on 150,000 tons of Lithium Carbonate Equivalent capacity, mostly around conversion assets and mainly for hydroxide.

Mined lithium has to be converted into chemicals before being able to make battery cathodes. Building and expanding in-house chemical conversion capacity can lower costs and reduce carbon emissions by eliminating the need for transporting bulk raw materials, according to BloombergNEF analyst Allan Ray Restauro.