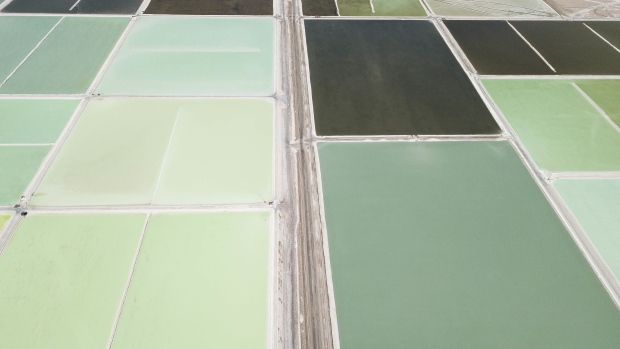 Brine pools at the Albemarle Corp. Lithium mine in Calama, Antofagasta region, Chile, on Tuesday, July 20, 2021. Albemarle Corp., the world's biggest producer of lithium, is fast-tracking advanced forms of the metal that could result in better batteries for electric vehicles. , Bloomberg

(Bloomberg) -- The world’s largest lithium producer is urging the US government to cut red tape to accelerate a build-out of a domestic supply chain for materials needed for batteries, electric vehicles and cleaner technologies while cutting dependence on China.

China has more than half of all capacity for refining lithium into chemicals that are used to make batteries that power EVs. Its dominance has sparked concerns in the US and with other countries competing to secure supplies of the key battery metals—which also include nickel and cobalt—needed in a global push to transition from fossil fuels to cleaner energy sources.

The only way for the US to have a chance of catching up to China, South Korea and Japan is to make it easier to build a supply chain in the country “and have the government clear the way to make sure that happens quickly,” Eric Norris, lithium president at Albemarle Corp., said in an interview. “It takes more than money,” he said on the sidelines of Fastmarkets Lithium Supply and Battery Raw Materials Conference in Phoenix.

The Biden administration added battery metals including lithium to the list of items covered by the 1950 Defense Production Act, which could help mining companies access $750 million to fund production at existing operations as well as productivity and safety upgrades and feasibility studies. The changes to the act do nothing to streamline the permitting process, which Norris said is vital in helping miners like Albemarle build a domestic supply chain.

Critics worry that streamlining permitting would sacrifice environmental standards. The Biden administration has said it can improve the efficiency of permitting mines in the US while maintaining standards.

Steps the government can take include clearing the way around the permit process for miners, creating tax incentives, and making it easier to build a supply chain in the US, Norris said. While there are discussions about reducing red tape and facilitating the permitting process, no concrete actions have been taken so far, according to Norris, who sees the Biden administration as trying to strike a balance between creating a domestic supply chain to enable more sustainable forms of energy with environmental concerns.

“It’s hard to have your cake and eat it too,” Norris said. “If we want to rid the world of CO2, ozone depletion, we want to have EVs to enable that to happen, and we want to have a supply chain that isn’t dependent on a foreign country—which we may have at times of tensions from a geopolitical standpoint, like China—then these are things that have to be done to speed things along.”

Albemarle is in the process of restarting its Kings Mountain mine in North Carolina, reviving an operation that was idled in the 1980s. The Charlotte, North Carolina-based company also plans to build a facility to convert raw lithium into the chemicals that go into EV batteries and is in the process of selecting a location. The site will likely be in southeastern US and a decision will be made later this year, according to Norris.