Canada’s federal carbon tax is unconstitutional, an Alberta court ruled, handing a legal victory to opponents of the plan.

The national levy represents “a constitutional Trojan horse,” the Court of Appeal of Alberta said in a 4-1 ruling released Monday. “Buried within it are wide ranging discretionary powers the federal government has reserved unto itself. Their final shape, substance and outer limits have not yet been revealed.”

The 273-page ruling represents a legal victory for opponents of one of Prime Minister Justin Trudeau’s signature policy initiatives. The Court of Appeal for Saskatchewan ruled in May that the Greenhouse Gas Pollution Pricing Act was constitutional, and the Supreme Court of Canada has agreed to hear an appeal of that decision.

The federal carbon tax is imposed on provinces that haven’t introduced their own plans meeting certain requirements. The system includes a levy on fuels and rebates to households as well as some exemptions for trade-exposed emitters. 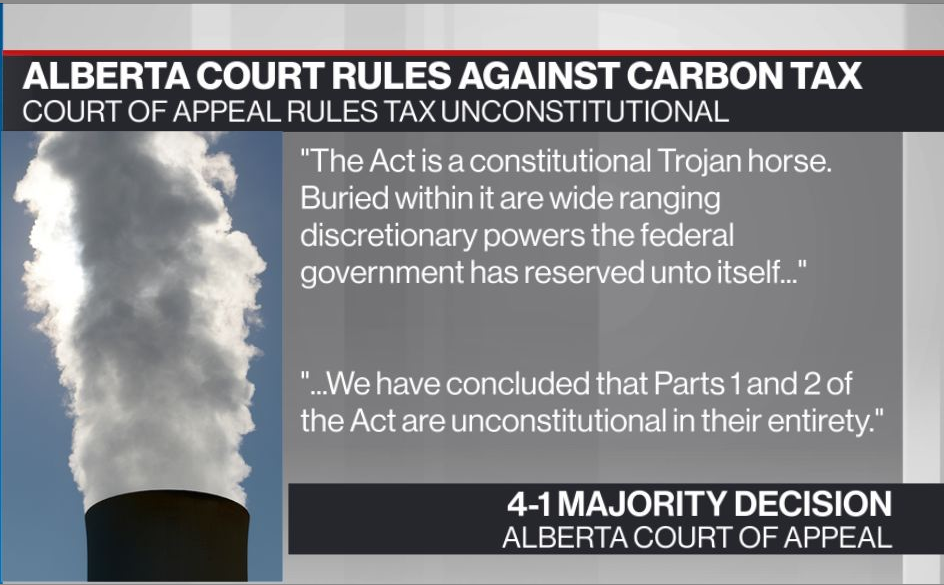 Alberta’s attorney general argued the carbon tax infringes on the provinces’ jurisdiction over the development and management of their natural resources and sets a precedent that would allow the federal government to exert further control over the provinces.

Very pleased that Alberta's court of appeal has ruled the federal carbon tax to be unconstitutional.

We promised to take meaningful action on climate change without punishing Alberta families for driving to work and heating their homes. pic.twitter.com/clfseHWxHc

Premier Jason Kenney’s government also argued that the tax disproportionately hurt the province, which is heavily dependent on its oil and gas industry.

Alberta “is unwilling to have the federal government impose carbon pricing measures that fail to account for the unique nature of Alberta’s industries,” the province said in a filing to the court.

The attorneys general for Saskatchewan, Ontario and New Brunswick joined Alberta in arguing against the carbon tax.

Canada’s attorney general argued that the carbon tax is valid and falls well within Parliament’s jurisdiction because responding to the “existential” threat of climate change requires a national plan.

“It is time for politicians of all political stripes to stop fighting action and start fighting climate change,” Trudeau’s environment minister, Jonathan Wilkinson, told reporters in Ottawa after the ruling.

The government looks forward to the Supreme Court “making the ultimate determination in March,” Wilkinson said. “We feel confident that the federal opinion will be upheld.”