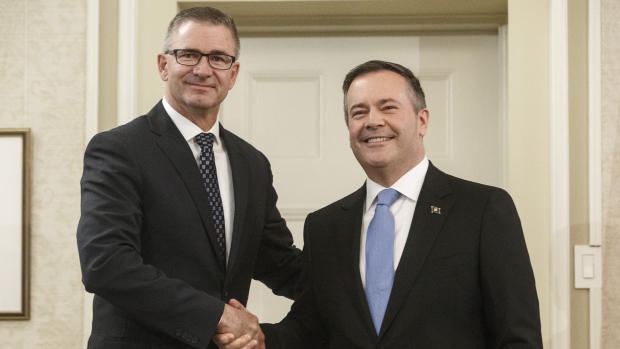 Alberta premier Jason Kenney shakes hands with Travis Toews, President of Treasury Board and Minister of Finance after being sworn into office,in Edmonton on Tuesday April 30, 2019. , The Canadian Press

The move would affect thousands of workers across the province, including nurses, hospital support staff, conservation officers, social workers, correctional officers and sheriffs who protect politicians in the legislature.

Finance Minister Travis Toews says all options are on the table as the United Conservatives work to find savings to eradicate Alberta's annual multibillion-dollar budget deficits.

The issue involves unionized workers who took pay freezes in the first two years of their contracts but now have the right in the third and final year to have the wage portion reopened and subject to arbitration if necessary.

Toews says they want to delay those talks until after an independent panel reports in August on ways to save money.

The move was not announced by government but was revealed by the Opposition NDP in a leaked letter from Toews' ministry to public sector unions.

NDP critic David Eggen and United Nurses spokesman David Harrigan say the move is unfair and heavy handed and suggests the government believes it is above the law.