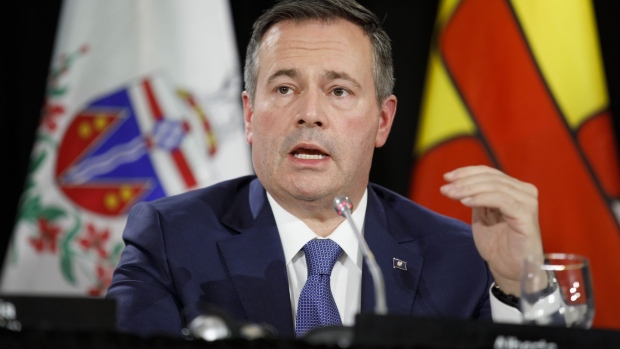 All social gatherings, even outdoor ones, will be banned for at least four weeks starting Sunday and masks will be required in all indoor areas, Premier Jason Kenney said during a press conference Tuesday. Casinos, gyms, nail and hair salons and entertainment facilities will be forced to close; bars and restaurants will be restricted to takeout and delivery orders.

Retail stores, malls and religious houses will be limited to 15% of capacity. People will be will be required to work from home unless their physical presence is required at the worksite.

Covid-19 restrictions have been met with protests and marches in Calgary, the biggest city in the province and the headquarters of its largest oil and gas companies. More than 20,000 people are currently infected by the virus in the province of 4.4 million people -- the highest infection rate in Canada -- and 640 people have died. The number of active cases has risen nearly fourfold since the end of October.

The province’s economy is expected to contract 8.1% this year, the most on record, because of virus restrictions and the downturn in oil prices. Home of the world’s third-largest crude reserves, outbreaks have happened at at least seven oil-sands sites in the north of the province.

The province has had to postpone non-urgent medical procedures as hospitals cope with the jump in coronavirus cases and the situation could become more dire if cases aren’t brought under control, Kenney said.

“We will eventually run out of hospital capacity” if the virus continues to spread, he said. “If stronger action is not taken now, hundreds or potentially thousands of Albertans will die.”

To help businesses affected by the new restrictions, Alberta expanded a grant program that was started in April. About 30,000 businesses in the province will now qualify for grants of as much as C$20,000 (about $15,600) if their revenues were cut by at least 30% due to the pandemic.