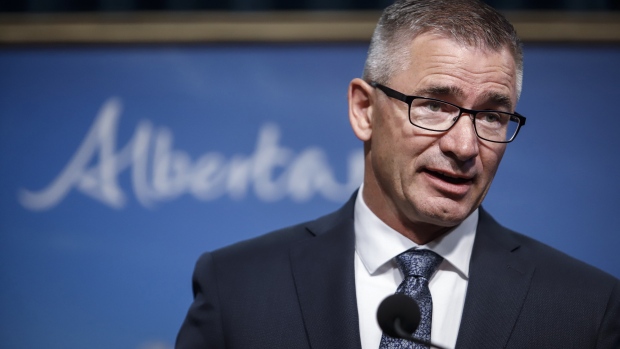 EDMONTON -- Finance Minister Travis Toews says COVID-19 will affect Alberta's economy for the next couple of years and perhaps beyond, but projections are encouraging.

"COVID-19 has created an environment of uncertainty, not just here in Alberta but around the world," Toews said Tuesday as he announced updated numbers for his current budget.

"I can't say whether the worst days are behind us in this pandemic. (But) I'm hopeful when I see signs of economic recovery out there. We're doing all we can to position Alberta for recovery."

Toews said the revised budget deficit this year will be $21.3 billion.

That's $2.8 billion less than projected at the first update in August, but still exponentially larger than the $6.8-billion deficit announced when Toews first presented the budget in February.

Since then, Toews said Alberta's economy has been hit by the "triple black swan": the COVID-19 pandemic, the drop in oil prices due to an international price war, and a global economic contraction.

But he said the updated revenue forecast for the current budget is $41.4 billion, almost $3 billion higher than last quarter due to improved forecasts for resource and gaming revenues, investment income and federal transfers.

Expenses are pegged at $62.7 billion, up $5.4 billion due to compensation and health-care initiatives responding to the COVID-19 crisis.

Total spending to fight COVID-19 and for pandemic recovery efforts is forecast to be $4.8 billion this year and an estimated $1.8 billion for the two years after that.

Revenue from non-renewable resources is forecast at $1.7 billion, down $3.4 billion.

Toews said there are encouraging signs, but it will be a long path to full recovery. Real GDP, a measure of a jurisdictions' total economic output, is expected to fall to 8.1 per cent rather than the expected 8.8 per cent this year and won't recover to 2014 levels until 2023.

Elsewhere, the province reported that the agriculture sector is reaping the rewards of strong crop conditions overall and the forestry sector is seeing higher prices for lumber.

In the labour sector, employment has gained back 72 per cent of the 360,900 jobs lost earlier this year during the first COVID wave. However, employment is still expected to shrink by seven per cent in 2020 and won't get back to 2019 levels until 2022.

Toews said recalibrating Alberta's finances in the long term will be tied to three "anchors": keeping spending under control and comparable to other provinces, keeping the net-debt-to-GDP ratio to no more than 30 per cent, and devising a post-pandemic timeline to get the budget out of the red.

"As we continue to face the challenge of the COVID-19 pandemic, we will continue to do everything we can to protect Albertans while also managing our finances responsibly."