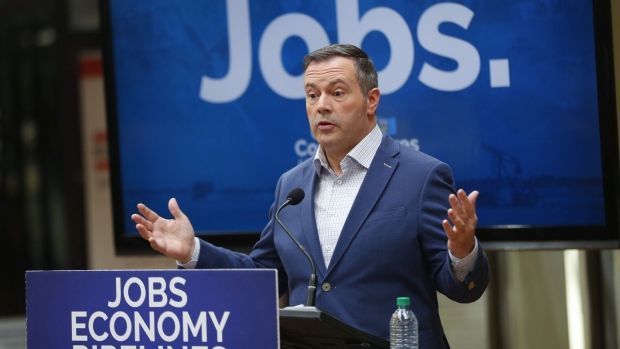 Signs on a vehicle during a trucker-led protest against vaccine mandates in front of the parliament buildings in Ottawa this February. , Bloomberg

Kenney quit the top job in the Canadian province Wednesday night after getting just 51.4% support in a party vote on his leadership. Some see his downfall as proof of the extraordinary difficulty of governing during the pandemic -- particularly in a province where opposition to lockdowns, vaccine mandates and public-health restrictions runs high.

For others, it’s the starkest warning yet to conservative politicians that a large portion of their voter base is turning against the political establishment.

Kenney’s departure comes as federal Conservatives hold their own leadership race, due to conclude in September. That contest kicked off after the party’s caucus voted out Erin O’Toole as leader in February during the height of the trucker convoy protests that gridlocked Canada’s capital city for three weeks.

The protests were motivated by intense backlash against Covid-19 restrictions. The leading contender to replace O’Toole, Pierre Poilievre, has championed the protesters’ cause and focused his campaign on the theme of freedom against government “gatekeepers.”

Melanie Paradis, who was a senior aide to O’Toole when he won the party’s leadership in 2020, said Kenney’s resignation shows how the pandemic has unleashed deep frustration among Canadians -- especially those who suffered from the economic lockdowns and school closures ordered by governments.

“There’s a lot of anger out there, and people who have struggled to direct it effectively want to know what to do with it,” Paradis said Thursday in a phone interview. “I think they’re lashing out at politicians and politics in general, looking for change.”

Kenney, 53, has been one of Canada’s most prominent conservative politicians for decades. The vote that sealed his fate came after more than a year of turmoil within his government, as members of his own caucus denounced the use of public health restrictions to control Covid-19 outbreaks.

Just five years ago, Kenney was at the height of his powers as he left federal politics and proceeded to unite Alberta’s feuding right-wing provincial parties. He then led the fledgling United Conservative Party to a decisive election victory in 2019, ejecting the New Democratic Party from government in the energy-rich province.

The backlash that brought Kenney down is the work of “agents of outrage” who “define their politics in solely oppositional terms,” Sean Speer, an adviser to former Prime Minister Stephen Harper during the same period Kenney was a federal minister, wrote for The Hub, an online conservative news outlet.

“The result is a siege mentality that’s more reactionary than it is conservative,” Speer wrote. “These people aren’t interested in incremental policy reforms. They’re looking for a fight. They want to toss a hand grenade into the cathedral of our mainstream institutions.”

But Yaroslav Baran, who served in several senior staff roles in Harper’s government and is now a principal at Ottawa-based consultancy Earnscliffe Strategies, said he doesn’t buy the argument that Kenney’s ouster says much about conservative politics in the rest of Canada, where conditions vary widely from province to province.

“Alberta is the most conservative province in Canada, also probably the most libertarian province in Canada,” Baran said by phone. “He made decisions that run largely counter to the culture of that province. Governments have been telling business owners to shutter their doors. That is hard to sell in Alberta.”