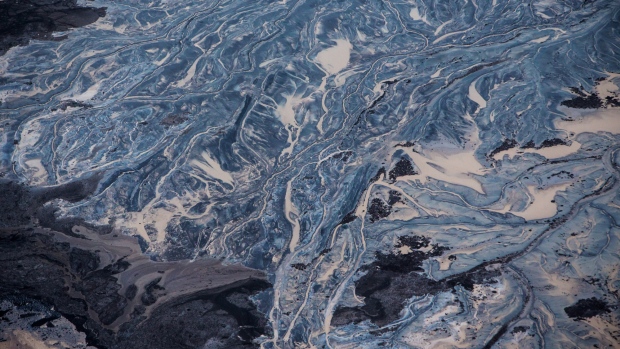 The Albian Sands Energy Inc. Jackpine mine is seen in this aerial photograph taken above the Athabasca oil sands near Fort McMurray, Alberta, Canada, on Monday, Sept. 10, 2018. While the upfront spending on a mine tends to be costlier than developing more common oil-sands wells, their decades-long lifespans can make them lucrative in the future for companies willing to wait. , Bloomberg

Notley said she’ll announce a plan to expand “made in Alberta” crude upgrading and refining in the coming days and has appointed three envoys to work with the industry and federal government to seek solutions for the dramatic discount earned for domestic oil. Asked if the province is considering mandating a production curtailment to help boost prices, she said no option has been discarded.

“At this point, all I will say is that there are a number of options in the suite of options and there is no option that has been taken off the table at this point,” Notley said at a news conference in Edmonton. Alberta is being treated as a “branch plant for the U.S.,” she said.

Canadian crude is trading near record lows amid pipeline bottlenecks, rising inventories and a decline in global oil prices. The Western Canada Select benchmark fell to under $14 a barrel last week, the lowest in Bloomberg data stretching back a decade. The depressed prices has prompted some oil companies including Canadian Natural Resources Ltd. to cut production and some to suggest that Alberta’s government should require companies to cut output.

The discount that Canadian producers receive for their heavy crude relative to the West Texas Intermediate benchmark, of about $40 a barrel, is costing the Canadian economy C$80 million ($60 million) a day, she said.

The envoys she appointed are Robert Skinner, a policy professor at the University of Calgary; Coleen Volk, the province’s deputy minister of energy; and Brian Topp, Notley’s former chief of staff.

To contact the reporters on this story: Robert Tuttle in Calgary at rtuttle@bloomberg.net;Josh Wingrove in Ottawa at jwingrove4@bloomberg.net

To contact the editors responsible for this story: David Marino at dmarino4@bloomberg.net, Carlos Caminada, Kevin Orland