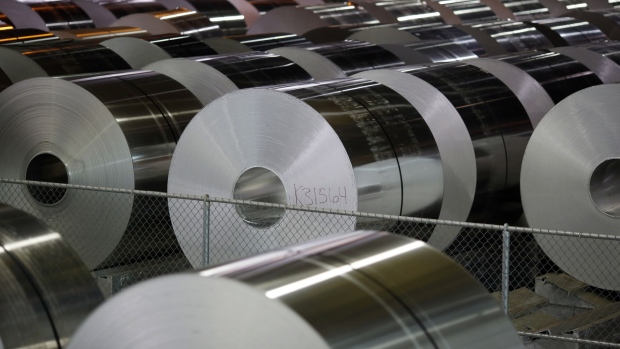 Rows of aluminum coils sit on the floor of the Arconic Inc. manufacturing facility in Alcoa, Tennessee, U.S., on Tuesday, Jan. 24, 2017. Arconic Inc. is scheduled to release earnings figures on January 31. , Bloomberg

(Bloomberg) -- Alcoa Corp., the U.S.’s biggest aluminum producer, has been enjoying such a strong rally in 2021 that the company is finally paying a dividend to its shareholders.

The company will pay out a 10-cent dividend to be paid on November 19th for stockholders of record at the close of business on Oct. 29. This is the first time Alcoa has paid a dividend since it split from the jets- and auto-parts business in 2016. The company also announced a share repurchase program of $500 million.

Alcoa’s stock has nearly quadrupled from a year ago, helped by a historic surge in aluminum prices. The metal used in everything from automobiles to MacBooks to beer cans has gotten a boost from supply chain snags and a global shortage amid surging demand.

The biggest U.S. aluminum producer reported earnings before interest, taxes, depreciation and amortization of $728 million, higher than the $697 million average of analysts’ estimates compiled by Bloomberg. Adjusted earnings per share was also a beat at $2.05, along with revenues of $3.1 billion.