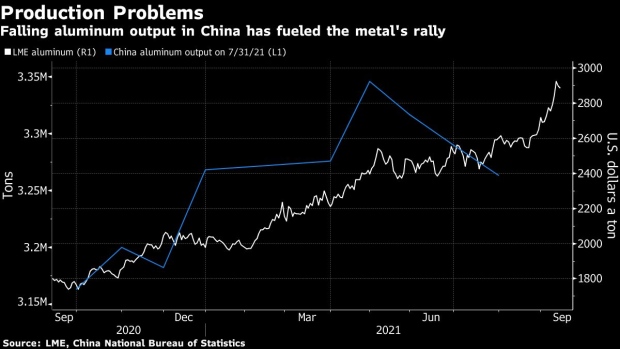 (Bloomberg) -- Alcoa Corp. is pulling the trigger on a project to restart an idled aluminum smelter in Brazil after prices of the metal surged to a 13-year high amid Chinese output cuts.

The top U.S. aluminum producer and its partner South32 Ltd. will spend about $75 million to restart Alumar in northeastern Brazil, it said in a statement Monday. The smelter, which has been fully curtailed since 2015, is set to produce its first molten metal in the second quarter of next year.

The decision, mentioned as a possibility in May, comes as one of the first signs that a massive rally is finally bringing more capacity on line. Used in everything from cars to beer cans, aluminum has nearly doubled over the past 18 months, transforming the fortunes of a long-struggling industry.

Energy restrictions are part of the supply constraints. In Brazil, electricity represents more than 70% of the cost of producing the refined metal. With a protracted drought in Brazil restricting hydroelectric supply, Alumar will be powered with 100% renewable energy by 2024.

The smelter is set to reach a 268,000-ton annual capacity in the fourth quarter of 2022. That will mean about 80% of Alcoa’s 2.99 million tons of global smelting capacity will be operating.

To be sure, surging energy costs are making it more difficult for higher-cost smelters to restart globally. Aluminum’s rally seemed ripe for producers to switch on idled capacity to catch a windfall in profits, but the process uses an immense amount of energy. A single plant can use as much electricity as it take to power a major city.

The restart will be shot in the arm for the industry in Brazil. The bauxite-rich country’s once cheap and abundant hydroelectricity turned it into the sixth-largest aluminum producer in the world. That ranking has now slipped to 15th.

“Our restart decision is based on an analysis that shows the smelter can be competitive throughout all cycles, leveraging the co-located refinery, a strong workforce, and competitive, renewable power arrangements,” Alcoa Chief Operating Officer John Slaven said.

Still, the full 268,000 tons of capacity represents a tiny fraction of global aluminum production. Researcher Harbor Intelligence forecasts output to total about 70 million tons in 2022. China alone will account for about 57% of that metal making.

(Updates with details in 6th paragraph and global production forecast in final paragraph.)