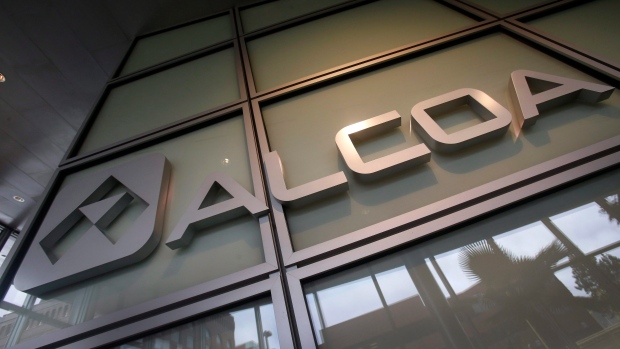 Cmpany logo in the lobby of Alcoa's headquarters in Pittsburgh. , The Canadian Press

Chief Executive Officer Roy Harvey will have seven people directly reporting to him when the changes take effect Nov. 1, from 12 currently, the Pittsburgh-based company said Monday in a statement. Alcoa will eliminate its business-unit structure and consolidate sales, procurement and other commercial functions.

The latest move is at least the second reorganization in Alcoa’s operations since it split in late 2016, and comes after the company’s shares fell by more than 50 per cent over the past year amid demand concerns fueled by the U.S.-China trade war and declining prices for aluminum. Prices have weakened even though the Trump administration imposed tariffs in 2018 on imports of steel and aluminum.

Andrew Cosgrove, an analyst at Bloomberg Intelligence, said Alcoa may not be able to cut much more fat from its operations. Alcoa’s general expenses as a percentage of sales were at 1.9 per cent last year, 2.4 per cent in 2017 and 3.9 per cent in 2016, he said in an email. “How much can they trim from that?,” he said.

Earlier this year, the Organisation for Economic Co-operation and Development said China’s huge subsidies for its aluminum makers continued to fuel excess plant capacity. Like other large aluminum producers, Alcoa has a large global footprint, generating only 44 per cent of its revenue in the U.S.

Alcoa is already a vastly different company than it was in 2016, when it split from the jet- and car-parts business in a major reorganization. The company’s structure was further refined in 2017, when Alcoa merged the aluminum smelting, cast and rolled products and most of the energy segment into its aluminum unit to reduce costs and complexity.

The resulting units from that reorganization -- aluminum, bauxite and alumina -- will now be under the supervision of the smaller executive group, though the company will continue to report financial results for each of the segments separately. The new model means the presidents of alumina, Michael Parker, and bauxite, Garret Dixon, will leave after helping with the transition.