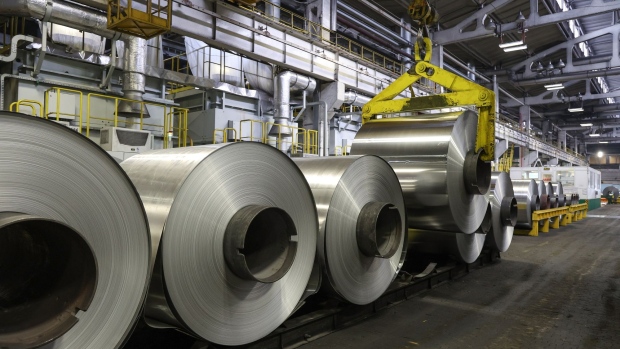 A hoist lowers an aluminium roll onto a storage platform at the Sayanal foil mill, operated by United Co. Rusal, in Sayanogorsk, Russia, on Wednesday, May 26, 2021. United Co. Rusal International PJSC’s parent said the company has produced aluminum with the lowest carbon footprint as the race for cleaner sources of the metal intensifies. Photographer: Andrey Rudakov/Bloomberg , Bloomberg

(Bloomberg) -- Alcoa Corp., the largest US aluminum producer, told the London Metal Exchange that Russian metal shouldn’t be traded on the benchmark industrial metals bourse, according to people familiar with the matter.

The company’s Chief Commercial Officer Kelly Thomas wrote in a letter to the LME that the exchange shouldn’t be used as a market of last resort for Russian metal, said the people, who asked not to be named because the information isn’t public. The letter urged the LME to take action to “avert an impending crisis.” Some market participants are concerned that a wave of Russian metal could be delivered to the LME, depressing the price that is used as a global benchmark.

What will happen to Russian metal is one of the hottest topics of debate among traders, with some fearing that unsold supplies could be dumped on the LME as many large European buyers shun it in negotiations for 2023 contracts. Alcoa’s letter is part of a broader lobbying campaign by some large US and European metal companies to persuade the LME to block new deliveries of Russian supply, according to people familiar with the matter. Several, including Rio Tinto Plc, Norsk Hydro ASA and Aurubis AG have spoken out against Russian metal in the seven months since the invasion of Ukraine. But so far they haven’t publicly argued for the LME to take action.

“Without immediate action, the LME aluminum contract will be disproportionately influenced by one brand that much of the Western world has rejected and will not properly reflect the actual supply and demand dynamics of the aluminum industry,” according to the letter. “Alcoa would have serious concerns about any pricing mechanisms that no longer accurately reflect the fundamentals of the aluminum industry, and the demand for non-Russian-origin metal that customers require.”

An Alcoa spokesperson confirmed the company sent a two-page letter on Sept. 29 to LME Chief Executive Officer Matthew Chamberlain and confirmed the details of the letter. The LME declined to comment.

The LME last week confirmed that it was considering launching a discussion paper on whether Russian metal should continue to be accepted for delivery against its contracts, news of which prompted a sharp rally in aluminum prices. United Co. Rusal International PJSC responded by saying it had no plans to make “significant or routine deliveries” of its aluminum to the LME.

While launching a discussion paper doesn’t mean the LME has made any decisions about whether to take action, it nonetheless marks a shift in approach for the exchange, which had previously said it did not plan to take any action outside the scope of sanctions.

Russian aluminum currently is not sanctioned in the US and across Europe, although a few European buyers are balking at purchasing the metal. Norsk Hydro won’t agree to any new Russian metal, while Novelis Inc. has excluded Russian production from a key tender for new contracts to supply its European factories next year.

Aluminum is flowing into the US from Russia at similar rates as before the war. Rio Tinto’s Chief Executive Officer Jakob Stausholm said in an interview last month that the continued flow from Russia was making North American producers less competitive.

The industry group that represents US producers, recyclers and makers of products of aluminum last week said at a conference that an LME ban on Russian aluminum would hit the US market, and reminded reporters how US buyers had to scramble to secure metal in 2018 when the US Treasury sanctioned Rusal, the Russian producer that accounts for about 10% of all US imports.