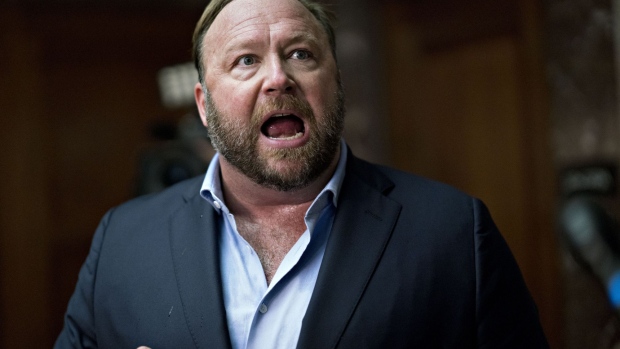 Alex Jones, radio host and creator of the website InfoWars, speaks to members of the media outside a Senate Intelligence Committee hearing in Washington, D.C., U.S., on Wednesday, Sept. 5, 2018. Lawmakers from both sides of the aisle have increased pressure on technology companies on Russian interference in the 2016 presidential campaign and other election meddling as well as issues including alleged anti-conservative bias and antitrust questions. , Bloomberg

(Bloomberg) -- The trial of Alex Jones, in which the InfoWars host was ordered to pay $4.1 Million in compensatory damages to Sandy Hook parents and $45 million in punitive damages for claiming the massacre was staged, stemmed from the same claim that Johnny Depp brought against Amber Heard: defamation. The parents claimed Jones defamed them by claiming they were actors who had never really lost their children in a mass shooting. Depp claimed Heard defamed him by writing a column accusing him of domestic abuse.

Jones’s trial wasn’t actually about whether he defamed the parents or not. He didn’t respond to a number of court filings so he’d already lost by default, and the jury was just deciding how much to make him pay. But if he had contested the claim at trial, he would might have tried to argue he was exercising his free-speech or free-press rights. Opinions, even wild or ill-informed ones, are largely protected by the First Amendment, but wrong or misleading factual statements can be defamatory.

The Supreme Court’s 1964 ruling in New York Times v. Sullivan established the so-called “actual malice” standard for defamation cases by public figures against media outlets: the plaintiff must show the outlet knew a story was false when it published it or recklessly disregarded the possibility that it was false. That’s a tough standard that’s made it very hard to sue the media in the US.

Here are a few recent cases that illustrate the arguments parties put forth in big defamation cases and how they can turn out:Palin v. New York Times Former Alaska Governor Sarah Palin sued the Times over a 2017 opinion piece that incorrectly suggested a map published by her political action committee helped incite a 2011 mass shooting in Tuscon, Arizona, in which six people were killed and 14 wounded, including then-US Representative Gabrielle Giffords. The Times corrected the piece within a day and claimed it was an “honest mistake,” but Palin, the 2008 Republican vice presidential nominee, accused the paper of deliberately or recklessly inserting the falsehood to harm her reputation. While the jury was deliberating, the judge announced he was going to dismiss the case because Palin had failed to present evidence that the newspaper’s conduct met the Sullivan standard. Palin is appealing the ruling and has suggested the case could be a vehicle for overturning Sullivan. Some conservative judges and commentators have said they believe that legal protection has fostered liberal bias in the media, and Supreme Court Justices Clarence Thomas and Neil Gorsuch have said it’s time to reexamine the standard and possibly make it easier to sue the press.

Dominion Voting Systems Inc. v.  Fox NewsSupposedly liberal media outlets aren’t the only ones claiming protection from defamation claims. Fox News is facing a  $1.6 billion suit by Dominion Voting Systems filed for broadcasting false claims by allies of then-President Donald Trump that the company’s voting machines were rigged to flip votes for him to Joe Biden. The conservative network claims it was merely reporting the news by interviewing those making the claims, like former Trump campaign lawyer Sidney Powell and former New York Mayor Rudy Giuliani, who are also being sued for defamation. Dominion has highlighted evidence suggesting Fox knew the claims were false — including an alleged phone call by Rupert Murdoch a few days after the election in which the Fox Corp. chairman told Trump he had lost. Dominion also recently subpoenaed former Attorney General Bill Barr, who publicly pushed back on Trump’s election fraud claims. In its suit, Dominion suggested Barr’s statements put Fox on notice that the fraud claims were false.

Unsworth v. MuskAmong the more notable times Elon Musk got into trouble on Twitter was his exchange with British cave diver Vernon Unsworth, who participated in the rescue of a youth soccer team that became trapped in cave by floodwaters. Unsworth sued Musk for defamation, seeking $190 million damages, after the billionaire called him a  “pedo guy” in a tweet. The tweet had been in response to Unsworth’s criticism of Musk’s proposal to rescue the team using a miniature submarine. After the children were rescued without Musk’s help, Unsworth said on CNN that the Tesla chairman’s proposal was a “PR stunt” and suggested he “stick his submarine where it hurts.” Though Unsworth testified that he felt he had been “branded as a pedophile,” the jury sided with Musk in finding that the insult wasn’t intended to be taken seriously.

Beef Products Inc. v. ABC NewsSouth Dakota-based meat processor Beef Products Inc. sued ABC News in 2012 over news reports that described their “finely textured beef product” as “pink slime.” Beef Products claims the reports led customers to mistakenly believed the product wasn’t meat and wasn’t safe to eat, and sales plummeted from about 5 million pounds per week to less than 2 million pounds after grocery chains around the country said they’d stop carrying products that contained it. Beef Products sought $1.9 billion in damages, but that amount might’ve tripled under a South Dakota law against disparaging agricultural products. The suit went to trial in June 2017, but the Walt Disney Co., the parent company of ABC News, announced it had agreed to pay $177 million to settle the case before the jury rendered a verdict.Carroll v. TrumpNew York advice columnist E. Jean Carroll, said in a 2019 article that Trump sexually assaulted her in the 1990s in a Manhattan department store dressing room. The then-president subsequently told reporters that Carroll’s account wasn’t true and she wasn’t his “type.” Carroll responded by  suing him for defamation for calling her a liar. Trump’s lawyers have advanced a series of arguments to stall or dismiss her suit, the most intriguing of which has been the claim that his statements about Carroll fell within his official duties as president and are therefore immune from civil suits. Trump got some surprise backing for this position when President Biden’s Justice Department took up the previous administration’s attempt to end Carroll’s suit. Though Trump’s remarks were “crude and disrespectful,” the Justice Department said in a court filing last June, “speaking to the public and the press on matters of public concern are undoubtedly part of an elected official’s job.” The trial judge rejected that argument but it’s now under appeal.