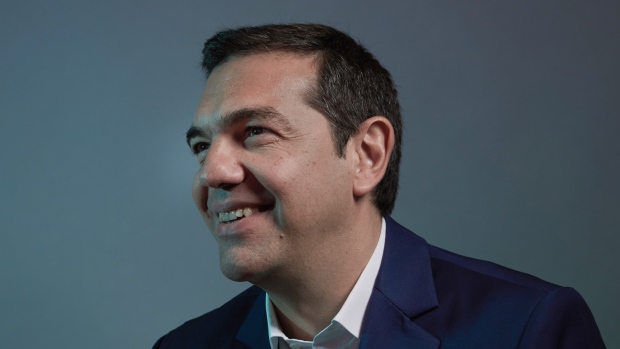 (Bloomberg) -- Greek Prime Minister Alexis Tsipras came out victorious from a stormy week that saw a confidence vote, violent protests, parliamentary shakeups and party breakups, all stemming from an issue that has dominated the recent political debate in the country: Macedonia.

The Greek parliament on Friday ratified its part of the agreement with the Republic of Macedonia to change the latter’s name to the Republic of North Macedonia, securing Greece’s support for its accession to the North Atlantic Treaty Organization and the European Union.

With the vote, Greece may have put to bed an age-old dispute over the name “Macedonia,” which opponents of the deal said applied to the country’s northern province -- the ancient stronghold of Alexander the Great -- and couldn’t be claimed by its neighbor.

Tsipras has been strengthened by the events, reaffirming his control in parliament after surviving a confidence vote without the support of his former coalition partner and securing 153 votes for the so-called Prespes agreement in Greece’s 300-seat chamber. The path is now clear for him to push his agenda in hope of increasing his popularity among Greek voters enough perhaps to even win the country’s general elections this year.

“The ratification of the Prespes agreement and the recent win in the confidence vote boosts Alexis Tsipras and his government,” said Thomas Gerakis, the head of the Athens-based pollster MARC. “It makes the path forward clearer for the government as its planning and strategy have worked out well, but it remains to be seen how far that can go.”

The 44-year-old, who took over as premier at the height of the Greek financial crisis and reigned over the country’s third and final international bailout that ended in August, lags in the polls. His agenda to regain ground includes a long-awaited Greek return to the international bond market since leaving the country’s bailout, an ambitious plan to bring down the staggering non-performing loans at banks, a constitutional reform, an increase in the minimum wage and a plan to protect home-owners from foreclosures.

With the main opposition New Democracy party of Kyriakos Mitsotakis consistently leading in the polls, Tsipras will need as much time as possible to turn the tide, making October a possible month for the country’s next national elections, with the government’s current term ending in September. Running to polls as early as May is still an option for the government, as local government and European elections will be also held at that time.

While Tsipras’s agreement with Macedonia may have cost him some Greek votes, it earned him points on the foreign policy front. The Republic of Macedonia’s accession to NATO would reaffirm the treaty’s influence over the relatively unstable region of the Balkans, with Greece playing a leading role.

“The Prespes Agreement settles in a mutually beneficial way a dispute that has burdened both countries for almost 30 years,” said Ioannis Armakolas, an expert on the Balkans and a Research Fellow at the Athens think-tank ELIAMEP. “If utilized in an optimal manner by the two governments, and provided that the EU accession process of North Macedonia will be at last revitalized, the two countries have the opportunity to resolve all remaining problems and build a solid strategic partnership in the years to come.”

--With assistance from Antonis Galanopoulos.

To contact the reporter on this story: Eleni Chrepa in Athens at echrepa@bloomberg.net

To contact the editors responsible for this story: Sotiris Nikas at snikas@bloomberg.net, Vidya Root, Paul Tugwell