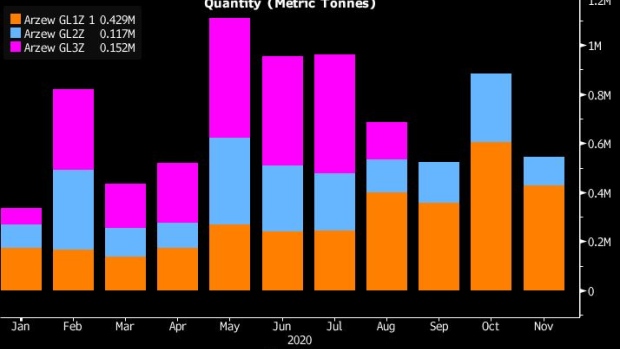 (Bloomberg) -- A disruption in liquefied natural gas exports from Africa’s second-biggest supplier is tightening the global market and contributing to a rally in spot rates.

The port of Arzew, home to Algeria’s massive LNG production complex, has been at a standstill for about 10 days due to bad weather, a person with direct knowledge of the matter said, asking not to be identified because the information has not been made public. Algeria was already struggling with separate export issues since late summer, according to traders of the fuel.

Unplanned maintenance at facilities from Australia to Qatar have cut global supplies over the last few months just as demand is rising from customers seeking volumes for the winter. The lack of available cargoes has pushed Asian spot rates to the highest level in about two years.

At least two LNG vessels are idled near the Arzew port, with one of them -- the Lalla Fatma N’Soumer -- in place since Dec. 1, according to ship-tracking data on Bloomberg.

The GL3Z LNG plant at Arzew has not exported a cargo since mid-August, while total exports from Arzew slipped in November from the previous month, according to ship-tracking data on Bloomberg. Sonatrach, which operates the export plant, has increased flows via pipeline to southern Europe, two traders said. Sonatrach didn’t immediately respond to a request for comment.

Sonatrach hasn’t been offering any cargoes to the spot market to take advantage of rallying prices and increased winter demand, suggesting the company has limited volumes available to sell, traders said.