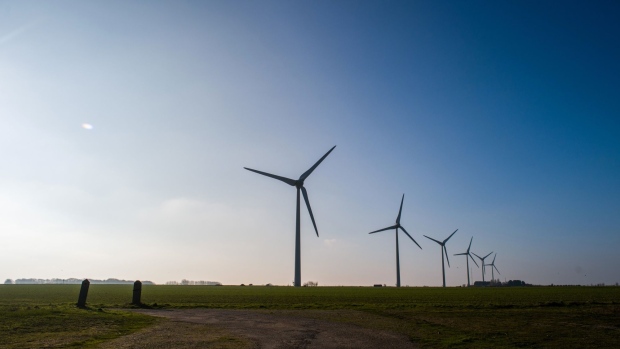 Wind turbines at a field near the Penly nuclear power plant, operated by Electricite de France SA (EDF), not pictured, on the outskirts of Penly, Normandy, France, on Monday, Jan. 24, 2022. France, located at the heart of Western Europe's power grid, with its fleet of nuclear reactors has for decades been the continent's largest electricity exporter, supplying the U.K., Spain, Italy, Switzerland, Belgium and Germany at times of peak demand. , Bloomberg

(Bloomberg) -- Algonquin Power & Utilities Corp., a Canadian electricity firm expanding in the U.S., is considering using derivatives to hedge the risk that rising interest rates bring to its funding costs.

“We are locking-in the rates potentially,” via derivatives, Chief Financial Officer Arthur Kacprzak said in an interview. So “the financing and the economics of the underlying assets continue to hold.” Kacprzak added that the company has used such instruments in the past. While Algonquin hasn’t decided on a specific strategy, companies often use futures, swaps and other derivatives to hedge rate risk.

Algonquin Power is growing via acquisitions and renewable power partnerships with firms such as JPMorgan Chase & Co., part of a $12.4 billion investment plan over the next five years. The utility has used senior unsecured bonds to raise funds, a model that could come under pressure as central banks are poised to raise rates to combat the fastest inflation in decades.

“We’re unique in a way because we finance on an unsecured basis,” said Kacprzak. “It gives us flexibility, because you’re not locking up any of the assets.”

Earlier this month, Algonquin raised the equivalent of about $1.07 billion by selling so-called hybrid securities in U.S. and Canadian dollars to help finance the purchase of American Electric Power’s assets in Kentucky for $2.85 billion, including debt. The company may return to the U.S. dollar bond market via its Liberty Utilities unit to refinance some of the debt taken over as part of that deal, said Kacprzak.

The utility also may refinance and increase a $500 million corporate credit facility using a new sustainability-linked loan, a type of financing where the interest cost is connected to compliance with certain environmental or social metrics.

“We’re starting to talk, starting to think about it,” said Kacprzak. Algonquin has already issued green bonds through its Liberty and Algonquin Power Co. subsidiaries.