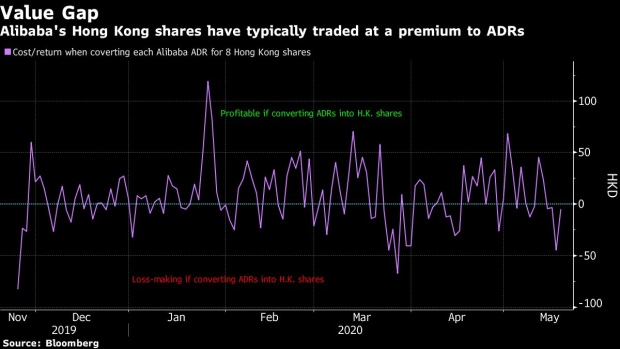 (Bloomberg) -- There’s a relatively low-risk way to gain from Alibaba Group Holding Ltd.’s stock should a rush of passive funds push up its valuation in Hong Kong.

Arbitraging the shares -- or purchasing Alibaba in one market to sell it in another for a higher price -- allows traders to exploit even the smallest difference between U.S. and Hong Kong listings. While the city’s pegged currency means the strategy will never be hugely profitable, shares traded there are expected to become more attractive to investors than the American depositary receipts.

Hang Seng Indexes Co.’s decision to include dual class shares and secondary listings in its benchmarks opens the door for Alibaba -- the world’s seventh most-valuable company -- to join. That alone would boost index-tracking purchases of the Hong Kong stock. Those in the market also see some active money shifting toward the Asian listing, given the more favorable time zone for the region’s investors, the potential for access to trading links with China and deepening scrutiny of mainland companies in the U.S.

“Hong Kong will become the core market for Alibaba trading in the future,” said Nelson Yan, head of offshore capital markets investment product at Creditease Wealth Management (Hong Kong) Ltd. “More people will convert their U.S.-listed Alibaba shares into Hong Kong-listed ones, not just because of potential index-related flows but because overall ADR performance is increasingly clouded by accounting concerns.”

To be sure, the return from converting equity has been fairly volatile. Investors who hold U.S. equity could have obtained a paper gain of as much as HK$119 ($15.35) per converted ADR in late January if immediately selling the Hong Kong shares. On Tuesday, doing the same would have yielded a loss of HK$5 per ADR.

To convert, ADR holders must turn in the equity to the depositary bank -- in this case Citibank NA-- through their brokers. Once fees are settled, the depositary bank distributes eight Hong Kong shares for each ADR received, according to the Alibaba prospectus. Holders need to pay as much as $0.05 for converting each ADR.

“More people will want to shift shares back to Hong Kong if the city’s shares are a little bit higher than the ADRs. Lots of people have done so since the November listing and I expect this trend to continue,” said Chi Man Wong, analyst at China Galaxy International Financial Holdings Ltd. The Hong Kong stock is 20% above November’s offering price.

The depositary bank’s total share holdings has decreased by 940 million since Alibaba’s Hong Kong listing, according to exchange data, which Wong said indicates conversion demand. The bank still holds about 3.3 billion shares for its clients, or 15% of total outstanding equity in the company, exchange data as of Tuesday show.

Investors converting into Hong Kong shares could help Alibaba establish a greater weighting in the Hang Seng Index if it gets included. The amount will be calculated only on shares registered in Hong Kong. At current levels, Alibaba would have a 3.4% weighting, less than the 5% ceiling for secondary listings announced earlier this week, according to Wong. That would put its weighting below Tencent Holdings Inc.

Currently, about 22% of Alibaba’s equity is registered in Hong Kong, while the rest are in the U.S., according to according Hong Kong stock exchange data.

“If you want to boost Alibaba’s potential weight in the index, you need to increase the portion of registered shares in Hong Kong,” Wong said. “For now, converting ADRs is the only way to achieve that.”