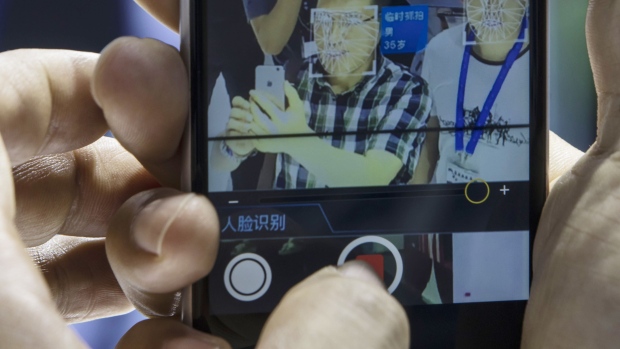 An attendee uses his smartphone to record a facial-recognition demonstration on himself at the Beijing Megvii Co. booth at the MWC Shanghai exhibition in Shanghai, China, on Thursday, June 27, 2019. The Shanghai event is modeled after a bigger annual industry show in Barcelona. Photographer: Qilai Shen/Bloomberg , Bloomberg

(Bloomberg) -- Megvii Technology Ltd. is poised to become the first major Chinese artificial intelligence startup to go public after it filed for a Chinese Depositary Receipt offering on Shanghai’s Star board on Friday.

The startup, backed by Alibaba Group Holding Ltd., plans to issue up to 253 million Class B shares as the underlying stock for the CDR offering, according to its prospectus. The offering may raise at least 6 billion yuan ($925 million) after fees, which will be used to fund research and development in robotics and visual Internet of Things as well as to replenish capital, the filing shows. Citic Securities Co. is the sponsor of the listing.

Megvii is one of the world’s largest AI startups, specializing in areas such as facial recognition. The eight-year old firm gained fame in part because of China’s obsession with security, which in turn drove a nationwide video surveillance boom. It registered a loss of 1.03 billion yuan ($160 million), excluding one-time items, in the first nine months of 2020, according to its prospectus.

The company’s application for a Hong Kong listing about two years ago lapsed after it become one of several Chinese companies the Trump administration blacklisted over alleged involvement in human rights violations against Muslim minorities in China. It now joins Lenovo Group Ltd. in taking advantage of the CDR program Beijing kicked off three years ago to lure promising startups and big names to mainland bourses.