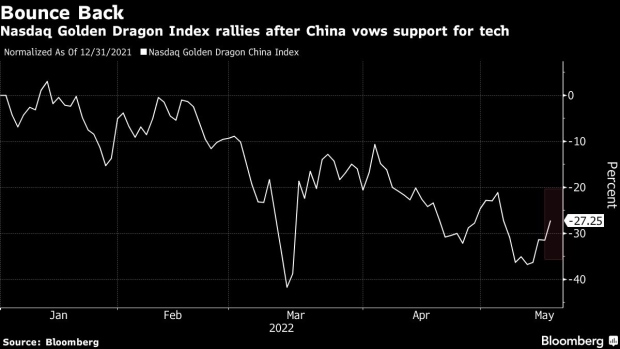 (Bloomberg) -- Chinese internet stocks jumped in US trading after a senior Communist Party official reaffirmed support for the industry, stoking optimism that regulators may ease a yearlong clampdown.

Chinese Vice Premier Liu He said the government will support the development of digital economy companies and their public listings, in a remarks reported by state media after a symposium with the heads of some the nation’s largest private firms. The top economic official gave similar assurances two months ago, when he also vowed to keep markets stable and stimulate the economy.

“This should definitely help investors’ sentiment,” said Henry Guo, an analyst at M Science LLC. “How sustainable the rally depends on how quickly the China economy can recover post this pandemic lockdown. But I believe the worst is already behind us and investors are starting to become constructive on China ADRs.”

Moves by Shanghai to tentatively unravel a punishing lockdown also boosted sentiment, with the Chinese financial hub reporting a third consecutive day of no new virus cases in the broader community. China is largely sticking to its Covid Zero strategy, even though a slew of data have showed mounting economic costs.

Some market participants are already turning more positive on Chinese equities, with JPMorgan Chase & Co. on Monday upgrading ratings on more than a dozen tech companies, saying uncertainties facing the group are starting to abate.

To be sure, many investors remain on the sidelines waiting for clearer signals while continuing to assess the nation’s Covid lockdown situation and economic recovery. The Nasdaq Golden Dragon China Index has declined 28% this year.

“The government’s comments about the tech industry were very vague, but people are happy about it. So this feels like another of the group’s periodic rallies. Until they back away from ‘zero-tolerance’ though, people are going to be wary about chasing the group,” according to Adam Crisafulli, founder of Vital Knowledge.

(Updates with prices throughout at close)