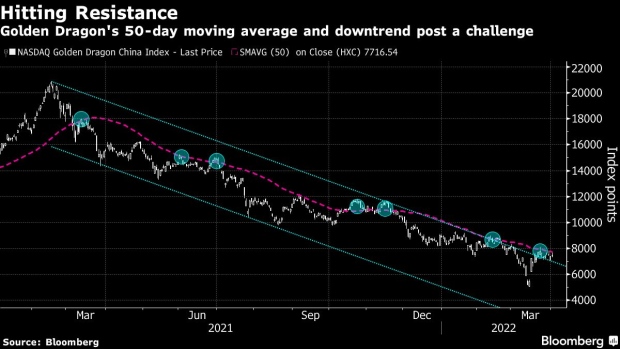 Alibaba rose as much as 5.2% and Didi climbed 8.5%, while JD.com Inc. advanced 7.2%. Pinduoduo Inc., Bilibili Inc. and iQiyi Inc. were among the top gainers, climbing at least 6.5% each. The advance in American depositary receipts tracked a 5.4% gain in Hong Kong’s Hang Seng Tech Index, the sharpest in two weeks. China was closed for a holiday.

“For now, investors are erasing the regulatory risk premium which is helping both markets and sentiment recover,” said Olivier d’Assier, head of APAC applied research at Qontigo. While the regulatory risks is receding, there still leaves a lot of macro risk which is yet unknown, as well as geopolitics, he added.

Beijing’s move could potentially remove a key hurdle to U.S. regulators gaining full access to auditing reports for Chinese companies listed in New York, ending a long-running dispute over data sharing. Last week, Bloomberg News had reported that Beijing is drafting a framework that will allow a majority of Chinese firms to keep their listings.

“We believe this is an important step in clarifying China’s stance on the audit dispute,” Morgan Stanley equity strategists led by Laura Wang said in an April 3 note. “We maintain our view that the likelihood of a final agreement being reached over the ADR audit dispute is now higher.”

While the latest statement appears to show Beijing is more constructive on this, some remain cautious until the final resolution comes through.

“I am expecting more twists going forward, as the U.S. and China go back and forth on this,” said Henry Guo, an analyst at M Science LLC. “The regulation overhang for Chinese ADRs should remain in the near future and investors are cautious about investing in them as regulation-related risks are totally out of their control.”

SEC chief last week dialed down speculation of an imminent deal with Chinese counterpart on the delisting issue.