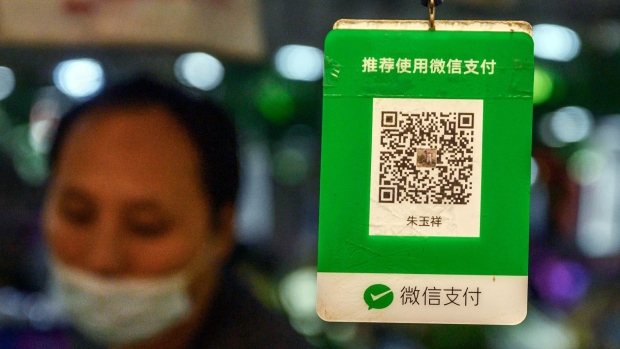 BEIJING, CHINA - SEPTEMBER 19: A Chinese vendor stands next to a QR code customers scan to pay via the WeChat app at a local market on September 19, 2020 in Beijing, China. The Trump administration announced Friday its intentions to ban the popular Chinese mobile app from U.S. app stores as of midnight on Sunday, marking an escalation in tensions with China on tech issues. The U.S. government said it also plans to prevent American companies from processing transactions made via the app. (Photo by Kevin Frayer/Getty Images) , Photographer: Kevin Frayer/Getty Images AsiaPac

An Alibaba representative confirmed the news, adding the company will continue to find common ground with peers to better serve consumers. While WeChat Pay still isn’t available on the e-commerce leader’s flagship Taobao app, a representative for the business said it is “actively” working toward introducing multiple payment methods on its platform.

The move comes after Beijing stepped up calls to free up the country’s internet arena, which has traditionally been dominated by ecosystems built around the twin giants. Earlier this month, Tencent allowed users of the WeChat social media app to link to rivals’ content for the first time in years, a major concession to regulatory pressure.

Read more: Why China Is Cracking Down on Its Technology Giants: QuickTake

China’s top technology regulator has warned internet firms to stop blocking links to rival services as part of a broader campaign to curb their growing monopoly power over data and protect consumers. The government has accused a handful of companies of unfairly suppressing competition in their respective spheres: Tencent in social media via WeChat, Alibaba in e-commerce with Taobao and Tmall and, more recently, ByteDance in video via TikTok-cousin Douyin.

China’s largest internet corporations have historically blocked links from within their services to rivals’ content. Earlier this year, Alibaba sought to set up a Taobao Deals lite app on WeChat and had already invited merchants to participate, Bloomberg News reported.

Shares of Alibaba jumped as much as 6.3% in Hong Kong Tuesday, snapping five days of losses. Tencent’s stock rose as much as 2.5%.