Alibaba and its three largest rivals -- Tencent Holdings Ltd., food delivery giant Meituan and JD.com Inc. -- have shed nearly US$200 billion in Hong Kong over the two sessions since Thursday when regulators revealed an investigation into alleged monopolistic practices at Ma’s signature company. That marked the formal start of the Communist Party’s crackdown on not just Alibaba but also, potentially, the wider and increasingly influential tech sphere.

“It is very hard to predict the outcome of the Chinese government’s ongoing investigation into Alibaba and other large consumer internet platforms,” Baird analyst Colin Sebastian wrote in a note. He cut his price target on Alibaba’s U.S.-listed shares to US$285 from US$325, citing “uncertainty around government oversight and potential for direct regulatory action in the coming year.”

The company’s American depositary receipts fluctuated Monday -- after a historic 13 per cent slide the previous session -- as volume passed the 12-month daily average in first half-hour, reflecting doubt over what’s going to happen next. JD.com fell 3.4 per cent and Tencent declined 2.9 per cent. The day’s Hong Kong trading was also fierce: Alibaba fell 8 per cent Monday, shedding US$270 billion of value since its October peak. Tencent and Meituan both tumbled more than 6 per cent.

KeyBanc Capital Markets wrote that this “significant” pullback had created an attractive buying opportunity, adding that it doesn’t anticipate a meaningfully different competitive landscape for the company.

On Sunday, China’s central bank ordered Ma’s other online titan -- Ant Group Co. -- to return to its roots as a payments service and overhaul adjacent businesses from insurance to money management, spurring talk of an eventual breakup.

Once hailed as the standard-bearers of China’s economic and technological ascendancy, Alibaba and its compatriots now face increasing pressure from regulators worried about the speed with which they’re amassing clout in sensitive arenas such as media and education and gaining influence over the daily lives of hundreds of millions. That concern crystallized in November, when regulators torpedoed Ant’s US$35 billion initial public offering before unveiling draft rules enshrining sweeping powers to clamp down on anti-competitive practices in sectors from e-commerce to social media. 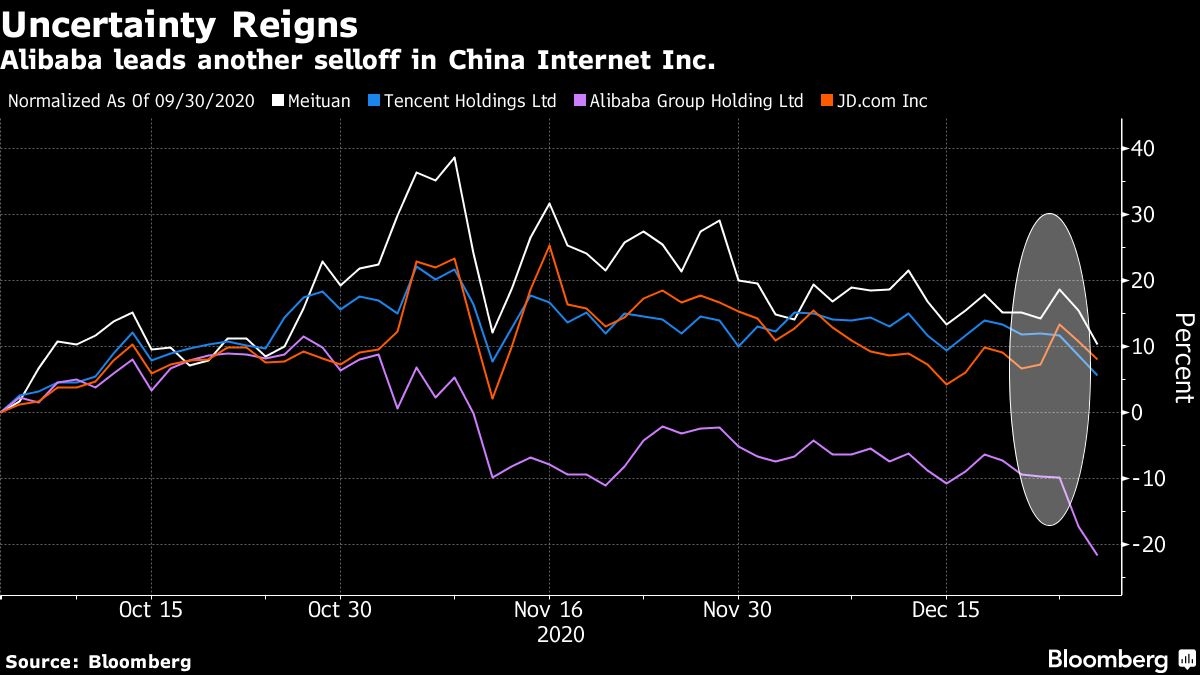 “The Chinese government is putting more pressure or wants to have more control on the tech firms,” Jackson Wong, asset management director at Amber Hill Capital Ltd., said by phone. “There is still very big selling pressure on firms like Alibaba, Tencent or Meituan. These companies have been growing at a pace deemed by Beijing as too fast and have scales that are too big.”

It’s unclear what concessions regulators may try to wring from Alibaba. Under the existing Antitrust Law -- now undergoing revisions to include the internet industry for the first time -- Beijing can fine violators up to 10 per cent of their revenue. In Alibaba’s case, that could mean a levy of as much as US$7.8 billion.

China’s e-commerce leader on Monday raised a proposed stock repurchase program by US$4 billion to US$10 billion, effective for two years through the end of 2022. But the buyback program was overwhelmed by fears that the steps taken against Ant are just the tip of the iceberg. While the central bank stopped short of calling for a breakup, the financial services giant now needs to present specific measures and a timetable for overhauling its business.

The State Administration for Market Regulation dispatched officials to Alibaba’s Hangzhou headquarters last Thursday and the on-site investigation was completed on the day, according to local news reports. The People’s Daily -- the Communist Party mouthpiece -- ran a commentary over the weekend warning Alibaba’s peers to take the antitrust investigation into Alibaba as a chance to lift their own awareness of fair competition.

Ma, the flamboyant co-founder of Alibaba and Ant, has all but vanished from public view since Ant’s IPO got derailed last month. As of early December, the man most closely identified with the meteoric rise of China Inc. was advised by the government to stay in the country, a person familiar with the matter has said.

Investors remain divided over the extent to which Beijing will go after Alibaba and its compatriots as Beijing prepares to roll out the new anti-monopoly regulations. The country’s leaders have said little about how harshly they plan to clamp down or why they decided to act now.

Some analysts predict there’s a crackdown coming, but a targeted one. They point to language in the regulations that suggests a heavy focus on online commerce, from forced exclusive arrangements with merchants known as “Pick One of Two” to algorithm-based prices favoring new users. The regulations specifically warn against predatory pricing -- selling below cost -- to weed out rivals.

“As this latest investigation occurs at a time when China is ready to take action against monopolistic practices, we think SAMR might want to use BABA’s case as a precedent to send a message to the rest of the industry that the authority is determined this time to address the” pricing issue, Nomura analysts wrote in a note Monday.

--With assistance from Jeanny Yu and Kristine Owram.