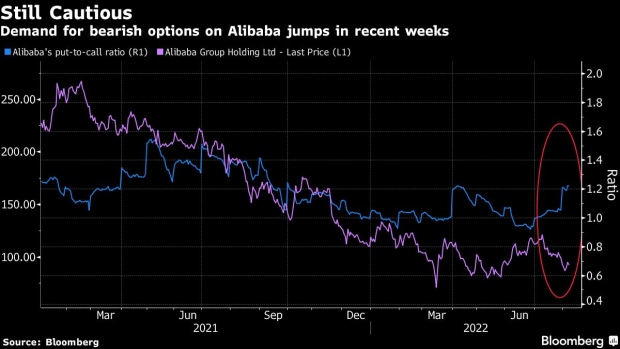 (Bloomberg) -- Alibaba Group Holding Ltd.’s better-than-feared sales figures haven’t persuaded options traders that the worst is over for the stock.

The put-to-call ratio derived from open interest jumped to about 1.2 times on Friday, the highest in about 10 months, suggesting bearish views on the Chinese e-commerce giant are holding sway. Put options benefit investors when shares drop below a pre-determined level, acting as an insurance against losses.

Alibaba’s shares fell as much as 3.3% in Hong Kong on Friday, snapping a two-day rally of 9%. The company’s first-ever revenue drop came in smaller than expected, as its cost-cutting measures began bearing fruit, but some analysts remain concerned that lingering macro uncertainties may weigh on the shares.

The shares are down more than 20% this year in Hong Kong, having retreated again after rebounding from a low in March as investors awaited earnings to gauge the impact of Beijing’s regulatory crackdown and Covid disruptions.

Bank of America analysts warned there is “limited visibility on consumption in coming months,” even as they reiterated their buy rating on the stock.

One of the most active options contracts Friday was set to benefit investors if the shares drop below HK$80 by the end of December, Bloomberg data show. The current price is around HK$92.75.

To be sure, some call options are also very active, including one that benefits buyers if shares rise beyond HK$100 by the end of August, according to the data.