Chairman Daniel Zhang, lieutenants wearing Alibaba lapel pins and Hong Kong dignitaries were on hand to strike the opening gong Tuesday at a celebration of the city’s biggest stock listing this year. The company presented a Chinese-style painting to the exchange — a souvenir to go with the showy coming-out party. The Chinese e-commerce giant’s shares rose to HK$187.60, versus a HK$176 issuance price. They traded under the code 9988 — auspicious numbers in Chinese culture that signify prosperity.

Asia’s most valuable corporation raised about US$11 billion in the financial hub’s largest issuance of stock since 2010, a triumph for a stock exchange that over the years lost many of China’s brightest technology stars to U.S. rivals. Now, the blockbuster debut by one of China’s most successful companies signals confidence in Hong Kong’s future even as pro-democracy protests grip the city, earning Alibaba goodwill in Beijing. It makes it easier for investors in the mainland to buy and sell Alibaba shares, which are primarily listed in New York.

It’s also a homecoming for Alibaba, whose decision to hold its US$25 billion initial public offering five years ago in New York dealt a blow to Hong Kong’s ambitions. Listing closer to home has been a long-time dream of billionaire co-founder Jack Ma’s. More broadly, his company has been trying to sustain growth at a time the engines of China’s economy are sputtering. Like fellow internet giant Tencent Holdings Ltd., Alibaba’s exploring new markets as China clashes with the U.S. over everything from trade and technology to investment.

“We came home. We came back to list in Hong Kong,” Zhang said to applause. “It helped make up for our regret five years ago.” 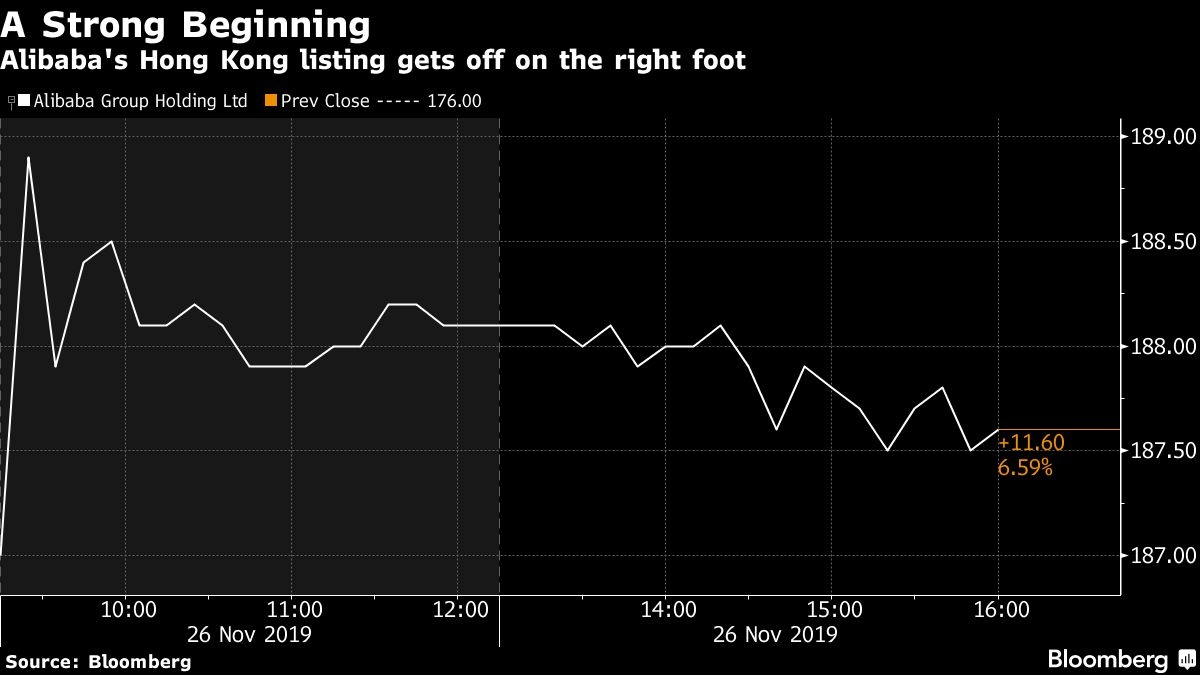 The Chinese company’s decision to forge ahead despite a recent escalation in protest-related violence pleased officials trying to persuade the world that the troubled city still has a future as a financial hub. Alibaba’s sale could tempt Chinese tech unicorns from Didi Chuxing Inc. to ByteDance Inc. to opt for Hong Kong over the U.S. if they eventually go public.

“Alibaba will be the leading light for bringing more companies in,” Andrew Sullivan, a director at Pearl Bridge Partners, told Bloomberg Television. “You may see some new money being allocated. The keen competitor is going to be Tencent, which has historically traded at a premium.”

The new funds now help Alibaba finance a costly war against homegrown rivals nipping at its heels. It could swell the company’s cash pile to about US$44 billion, more than any other internet company and roughly double that of arch-rival Tencent’s. The capital could bankroll competition with Tencent and Baidu Inc. in cloud computing and entertainment, with Meituan Dianping in food delivery and travel, and with everyone in terms of investing in promising startups that yield technology, talent or market share. And it could divert investor cash from those rivals — Alibaba is now the largest corporation to be listed in Hong Kong, pipping Tencent for the title.

Demand for Alibaba’s stock surpassed supply by several times and more shares were allocated to small investors. It’s a feather in the cap for Zhang, who took over as chairman from Ma in September. The former accountant is now spearheading the company’s expansion beyond Asia as well as into adjacent business lines from cloud computing to entertainment, logistics and physical retail.

Alibaba could put the capital to work investing in new technologies such as artificial intelligence, or fast-expanding affiliates such as Ant Financial. Courting investors closer to home also serves as a buffer of sorts should U.S.-Chinese tensions worsen. Already, U.S. lawmakers such as Senator Marco Rubio are agitating for measures to curb investment flows to Chinese companies, including the extreme option of tossing U.S.-listed firms off American bourses.