​-Alibaba Group Holding Ltd. offered investors few clues into how the regulatory crackdown on Jack Ma’s tech empire will impact its future growth after reporting a stronger-than-expected 37 per cent increase in quarterly sales.

The e-commerce giant has established a special taskforce to conduct internal reviews and is actively communicating with antitrust regulators on complying with their requirements as investigations continue, Alibaba said Tuesday. It’s also unable to make a complete assessment of how the ongoing “rectification” of affiliate Ant Group Co. will affect its business, according to the statement.

The stronger-than-expected earnings may be overshadowed by an ongoing antitrust probe that has already wiped more than US$130 billion off the e-commerce giant’s value since its October record. Uncertainty began in November when regulators first torpedoed Ant Group’s record initial public offering, then launched their investigation into the online retailer. Alibaba’s stock has dropped 13 per cent since Ant’s aborted debut, the worst performance on Hong Kong’s benchmark Hang Seng Index. The shares in New York were little changed in pre-market trading.

“Ant Group’s business prospects and IPO plans are subject to substantial uncertainties,” Alibaba Chief Executive Officer Daniel Zhang said on a conference call Tuesday. “We will further update the market when the investigation is concluded.”

Alibaba’s shares recouped some of their losses after Ma resurfaced in public during a live-streamed video conference last month, in an apparent signal that worst-case scenarios -- such as a government-led takeover or break-up of his companies –- are probably now off the table. Few expect Beijing to entirely back off its campaign to more tightly regulate Ant, Alibaba and the rest of China’s high-tech giants. But the stock’s partial recovery suggests investors are beginning to price out the risk of a crackdown that would put the country’s richest entrepreneurs and most innovative companies in serious jeopardy.

The full impact of the anti-monopoly investigation into Alibaba by China’s State Administration for Market Regulation (SAMR), as well as the new fintech regulations on Ant Group, may remain uncertain for some time. Alibaba disclosed with its 3Q results that it’s fully cooperating with SAMR but the investigation is yet to conclude. The company is also unable to provide a complete and fair assesssment of what effect changes to Ant Group will have on its business.

Sales climbed to 221.1 billion (US$34.2 billion) during the December quarter, topping the 215.3 billion yuan average of analyst forecasts, while net income climbed 52 per cent.

Two of Alibaba’s largest and fastest-growing divisions made it into the black during the holiday quarter -- an important milestone for the company. Its cloud business reported its first ever positive adjusted earnings before interest, tax and amortization, while revenue for the segment rose 50 per cent, driven by customers in the internet, retail and public sectors. Cainiao, its logistics unit, was also operating cash flow positive, the company said. 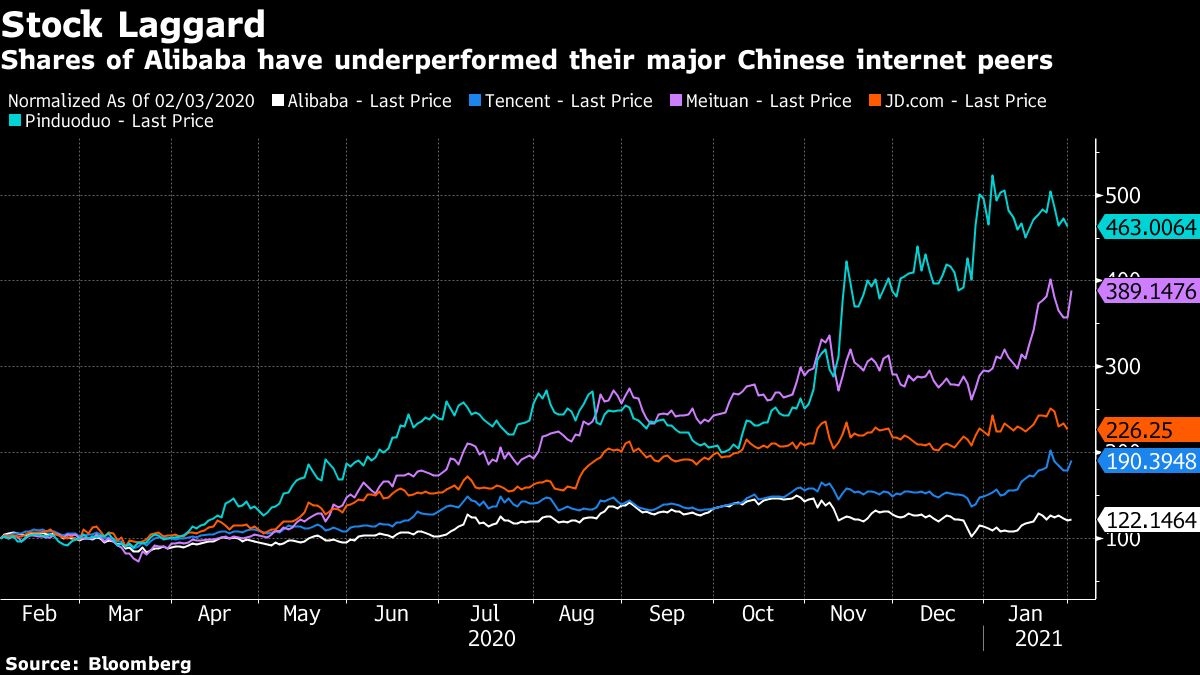 Annual active consumers grew to 779 million in the December quarter, driving a 38 per cent increase in its core commerce business. Alibaba booked US$75 billion of sales over its annual Singles’ Day promotions last November, easily beating its 2019 haul after the company began promotions early and added additional services to the count for the first time. The increased spending came even as overall retail sales fell 3.9 per cent last year, with consumption lagging industrial activity in the broader economic recovery.

But investors are questioning whether Alibaba can sustain that growth as Beijing steps up oversight of Chinese tech giants, particularly in online commerce. Ma’s firm, once the standard-bearer for China’s fast-rising private firms and booming internet sphere, now faces penalties of as much as 10 per cent of its revenue or some US$7.8 billion if it’s found to have violated rules against practices like forced exclusive arrangements with merchants known as “Pick One of Two,” predatory pricing or algorithms favoring new users.

Any regulations requiring Alibaba to implement a full halt to forced-exclusivity policies may hit Tmall’s sales by close to a tenth in 2021, before sales return to 18-20 per cent annual growth in 2022 and beyond, according to San Francisco-based Octahedron Capital Management LP. As of now, less than 10 per cent of the top-selling brands are exclusive, they estimated. While Alibaba has exclusive flagship stores with some merchants, in most cases they can sell the same goods on other platforms, Zhang said.

The regulations may also hamper its ability to fend off rivals from JD.com Inc. to Pinduoduo Inc., whose 730 million annual consumers are closing in on Alibaba’s user base. Meanwhile, short-video platforms like ByteDance Ltd. and Tencent-backed Kuaishou Technology are also tapping livestreaming as a sales outlet to wrest a larger e-commerce share. Beijing-based ByteDance revealed its Singles’ Day takings for the first time in 2020, with Douyin, the Chinese version of global sensation TikTok, booking 18.7 billion yuan in gross merchandise value.

Ant contributed 4.8 billion yuan to Alibaba’s profit in the quarter, indicating that the company earned 14.5 billion yuan in the three months ended September -- before its US$35 billion IPO was scuttled -- as its earnings lag one quarter behind Alibaba. As part of the crackdown, Ant has been told to “rectify” its lending, insurance and wealth management services.

Stricter capital requirements may kneecap Ant’s ability to issue loans as freely, adding to challenges for its sister company’s commerce operations. The fintech giant provides small unsecured credit to about 500 million people through its Huabei (Just Spend) and Jiebei (Just Lend) platforms. These are used in part to pay for purchases of clothing and makeup from the Taobao marketplace or trips booked on Fliggy, the group’s online travel site.

Payments using Huabei on Alibaba’s China marketplaces represent only a very small percentage of total credit granted under the platform, Zhang told analysts Tuesday. The “vast majority” of its customers have linked their payment accounts to multiple funding sources, he added.

Tighter regulatory scrutiny over mergers may impede the tech giant from snapping up promising startups in emerging industries or taking outsized stakes in other businesses to ward off competition. Alibaba -- which had in recent years spent billions on stakes in hypermart operator Sun Art Retail Group Ltd. and NetEase Inc.’s Kaola e-commerce platform -- was fined 500,000 yuan in December for not seeking approval before boosting its holdings in department store chain Intime Retail Group Co. in 2017.

“The business performance is strong and many feel the shares are undervalued compared to the roadmap and trajectory of some of their businesses,” Andy Halliwell, an analyst at technology consultancy Publicis Sapient, said in a research note after the earnings result. “However, if the Chinese government is looking to crack down on outspoken entrepreneurs and take a more conservative line with their larger tech businesses, then this will dent investors’ confidence in the brand and may create an opening for others to exploit.”