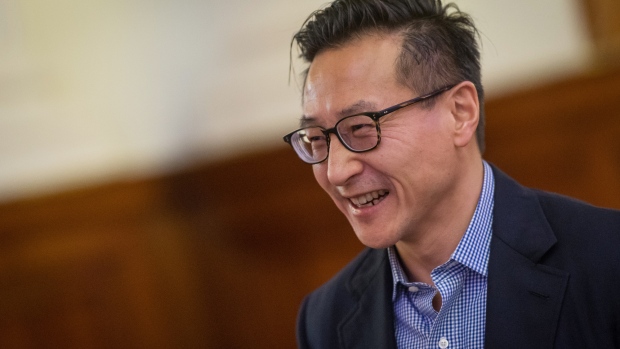 A worker moves electronic goods across the warehouse in the e-commerce distribution center operated by Alibaba Group Holding Ltd. in Domodedovo, Russia, on Monday, Feb. 4, 2019. With Amazon.com Inc. absent from Russia, the race to dominate an e-commerce market expected by Morgan Stanley analysts to grow by 25 percent a year looks wide open. Photographer: Andrey Rudakov/Bloomberg , Bloomberg

“Our business is delinked” from the Chinese economy because “we’re in e-commerce and we’re digitizing the whole sector,” Tsai said Tuesday at the Goldman Sachs Group Inc. technology conference in San Francisco. Tsai said the company’s growth would continue to outpace the broader economy as digital commerce expands faster than the traditional retail business.

China’s economy expanded 6.4 percent in the last three months of 2018 from a year earlier, according to the country’s National Bureau of Statistics. Alibaba’s revenue rose 41 percent to 117.3 billion yuan ($17.3 billion), though that was the slowest pace in more than two years. While the Chinese economic deceleration is depressing the consumer demand it relies on, the company’s been spearheading a drive into lucrative new spheres such as cloud services and entertainment, while helping modernize physical retailers.

He also praised China’s decision to reduce the tax burden for small and micro-sized companies by 200 billion yuan per year for the next three years, to boost those businesses amid the economic downturn.

“In prior cycles the Chinese government would use monetary policy to pump a lot of liquidity into the system,” Tsai said. Now, the government needs to “use fiscal policy, i.e. reducing taxes.” he added, “These SMEs, with more money in their pockets, will be growing their businesses.”

To contact the reporter on this story: Selina Wang in San Francisco at swang533@bloomberg.net

To contact the editors responsible for this story: Jillian Ward at jward56@bloomberg.net, Andrew Pollack, Edwin Chan