An estimated half-billion shoppers from China to Russia and Argentina swarmed the e-commerce giant’s sites to scoop up everything from Apple Inc. and Xiaomi Corp. gadgets to Ugandan mangoes. The company again hosted a televised entertainment revue in Shanghai to run alongside the bargain-hunting, this time enlisting Taylor Swift and Asian pop icon G.E.M. to pump up sales.

The world’s largest shopping event has become an annual ritual for Asia’s largest company, part showcase of commercialism and part publicity blitz. Also referred to as “Double 11” because it falls on Nov. 11, it’s closely watched by investors keen to gauge how willing Chinese consumers are to spend as economic growth threatens to slip below six per cent.

Tensions between Washington and Beijing continue to fuel uncertainty and roil global commerce. Among China’s largest corporations, Alibaba is expected to better ride out the storm, thanks to booming online consumption in the world’s No. 2 economy. On Sunday, Alvin Liu, a Tmall general manager, said Alibaba doesn’t expect any impact on its cross-border import business from an ongoing trade spat.

“Alibaba will probably be the one that will be able to circumvent and come out from the trade war in better shape” versus Baidu Inc. and Tencent Holdings Ltd., Richard Wong, head of ICT for the Asia Pacific at Frost & Sullivan, told Bloomberg Television. “The current sentiment and confidence in terms of spending is still relatively high.”

While Alibaba and its rivals routinely trumpet record sums in the event’s aftermath, it’s unclear how much Nov. 11 sales actually will contribute to the bottom line given the enormous discounting involved. A good result however could bolster Alibaba’s effort to raise as much as US$15 billion in a landmark Hong Kong share sale this month, according to people familiar with the matter.

Singles’ Day emerged as a uniquely Chinese antidote to the sentimentality surrounding Valentine’s Day. Emerging on college campuses across the country, it takes its name from the way the date is written numerically as 11/11, which resembles “bare branches,” a local expression for the unattached.

It’s now become an excuse for people to splurge. Last year, sales at Alibaba climbed 27% to 213.5 billion yuan, equivalent to $30.7 billion at the time. This time, purchases grew 26 per cent from the year earlier. More merchandise is sold online over the 24-hour period than during the five-day U.S. holiday buying spree that begins on Thanksgiving and ends on Cyber Monday.

“This is the power of expanding into less developed regions,” he said. “We hope this event can help more factories and farmers.” 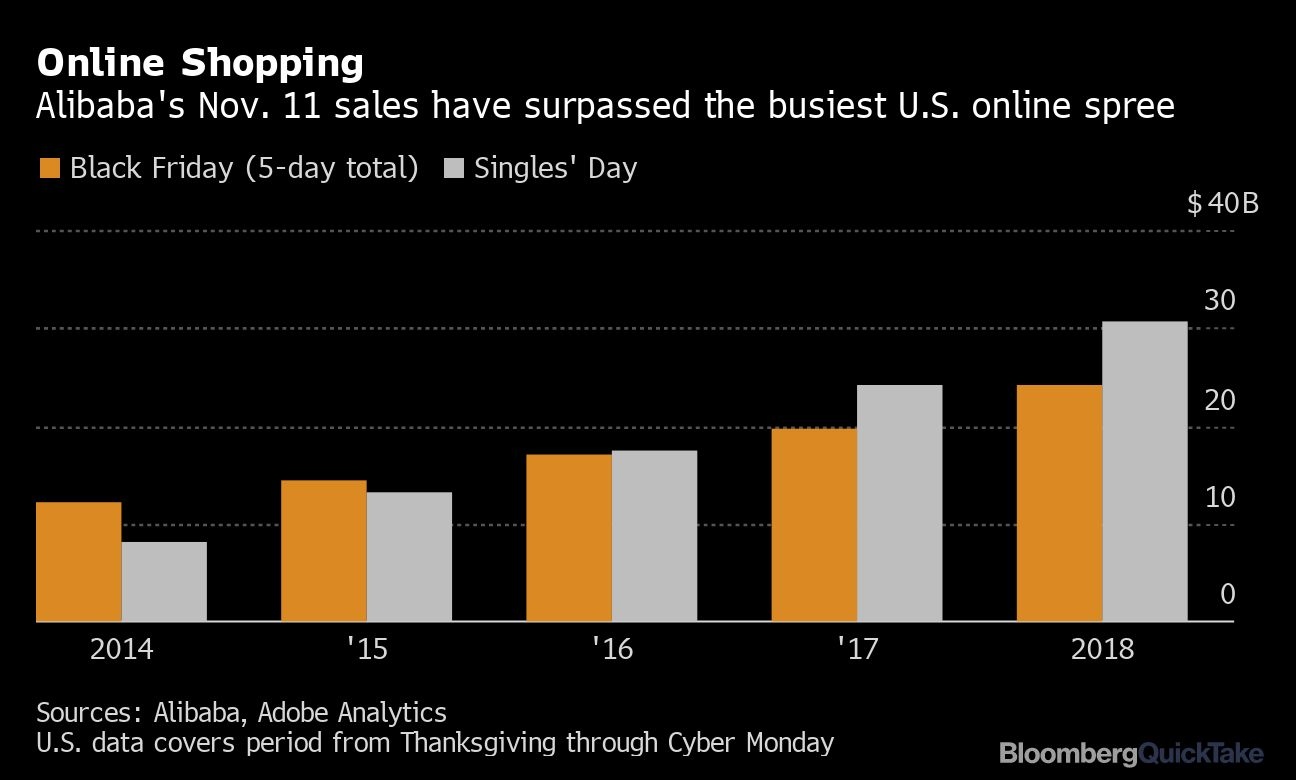 But the company faced stiff competition this year from smaller platforms including JD.com Inc. and Pinduoduo Inc. -- the aggressively expanding upstart that’s encroaching on the market leaders’ turf. They vied for the wallets of Chinese shoppers particularly in relatively untapped rural areas. All employ heavy discounting and hard-sell tactics in the run-up to and during the 24 hours in a bid to best the previous year’s record.

“Overall, we think this year will likely see a more competitive Double 11 period,” Ella Ji, an analyst at China Renaissance Holdings Ltd., said in a report. “We anticipate each platform will spend more on subsidies.”

Daniel Zhang, who took over as Alibaba chairman from billionaire Jack Ma in September, pioneered the show in its present form in 2015. The Singles’ Day impresario passes the baton this year to Fan, a potential successor to Zhang himself.

“Over the years, we’ve seen consumers become more diverse and younger. Each generation of consumers needs their own peers to serve them,” Zhang said in a post on Alibaba’s blog. “I think this young team is the future.”

The 2019 edition came with slight twists to the formula. Alibaba, stung by criticism it harmed the environment by shipping an estimated 1 billion packages in a single day -- has enjoined its logistics arm Cainiao to set up recycling centers at 75,000 locations. It says it will also work with courier companies to pick up used boxes and wrapping.

An expansion into Southeast Asia and less-developed areas in China plus newer services -- such as transactions on food delivery site Ele.me, grocery store chain Hema and travel service Fliggy -- bolstered the total. The company also brought in livestreamers including Kim Kardashian to appeal to younger buyers.

Other aspects remained the same. Singles’ Day has always been an opportunity for Alibaba to test the limits of its cloud computing, delivery and payments systems. Leaving little to chance, Alibaba sent teams across the nation ahead of Nov. 11 to help myriad outlets prepare for the festival. Some 200,000 brands had been expected to participate in 2019‘s edition of the festival.