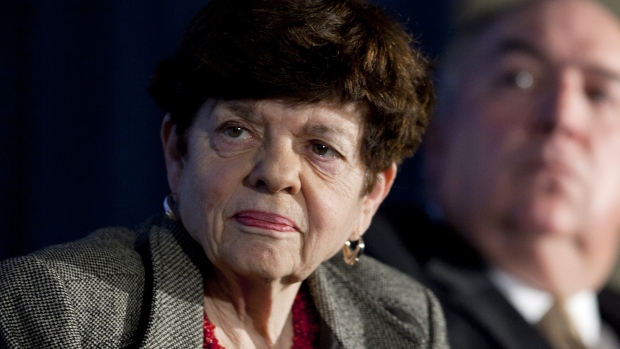 Alice Rivlin, the founding director of the Congressional Budget Office and a relentless fighter for deficit-reduction while vice chair of the Federal Reserve, has died. She was 88.

She died Tuesday at her home in Washington, according to an emailed statement from the Brookings Institution, where Rivlin was senior fellow. The cause was cancer.

Rivlin, whose career as an economist and budget scold included a stint as director of the Office of Budget and Management under President Bill Clinton, made her biggest splash as an advocate of debt and deficit cuts during the administration of President Ronald Reagan. As CBO director, she questioned the validity of his optimistic deficit projections, a criticism that caused an outcry among Republicans in Congress who called for her to step down.

“She forged a commitment to providing objective, nonpartisan information to help the Congress make eﬀective budget and economic policy,” a statement on the CBO’s website said. “And her commitment to high-quality analysis, well thought out and clearly presented, continues to be a guiding principle of CBO.”

Ezra Klein, editor-in-chief of vox.com, called Rivlin the “queen of Washington’s budget wonks” during a 2016 interview with her. “There is no budget wonk in Washington with a resume as thick as Alice Rivlin’s,” Klein said.

He cited her various federal government jobs, her work with the 2010 bipartisan National Commission on Fiscal Responsibility and Reform (the so-called Simpson-Bowles Commission) and her service as the president of the American Economic Association.

Trump's tax reform won't be stimulative in the near term: Rivlin

As the U.S. Federal Reserve keeps its benchmark interest rate unchanged, Alice Rivlin, former vice chairman of the Board of Governors of the Federal Reserve and senior fellow in economic studies at the Brookings Institute joins BNN to discuss the Fed's outlook and why a "chaotic" administration isn't getting much done in the form of fiscal stimulus.

While at the CBO, Rivlin set the tone for its cold-shower mission, saying it would act neutrally not politically in handling requests from members of any party for data or analysis. She called the CBO the “official purveyor of bad news to the Congress.”

Rivlin began her government career in the 1960s during the Great Society era of federal programs. She remained a consistent advocate of big central government as the director of policy, rather than private industry, and a critic of tax cuts that were promoted as likely to boost investment.

In 2008, she was named one of the greatest public servants of the previous 25 years by the Council for Excellence in Government.

“Alice had a hard head and a soft heart--a pragmatic approach to achieving fiscal sanity and assessing costs and benefits of policy alternatives, combined with deep concern about the impact of policy on people,” Janet Yellen, former Fed chair and distinguished fellow in residence at Brookings, said in the organization’s statement. “To women in economics, including me, Alice was a mentor, a role model, and an inspiration.”

She had worked at the liberal Brookings Institution before entering government, and returned there for repeated spells through the 1980s. In 1993, Rivlin became Clinton’s deputy budget chief under Leon Panetta, then replaced her boss -- and became the first woman to hold that cabinet post -- when Panetta became White House chief of staff.

Clinton, whose health and budget policies Rivlin sometimes criticized publicly, appointed her to the Fed in 1996, and she stayed there as vice chair until 1999.

She returned to Brookings as a senior fellow, writing prolifically on monetary, fiscal and health matters.

“Alice Rivlin was a cherished member of the Brookings community for more than 60 years, a trailblazer in the field of economic policy, and a civil servant of unparalleled devotion,” an emailed statement from the think tank said.

Rivlin remained a commentator on budget matters into the era of President Donald Trump, criticizing the economic proposals in his 2018 State of the Union message. In an interview with Bloomberg Television, she said he’d waited too long to start repairing U.S. infrastructure, and wasn’t addressing the looming deficit increases likely to be required by an aging population, with Trump’s tax cuts adding to the problem.

“No one is talking about how we pay for it in the long run,” she said. “We are headed down a track where our national debt keeps growing.”

Born Georgianna Alice Mitchell on March 4, 1931, in Philadelphia, to Allan Mitchell and the former Georgianna Fales, she dropped her first name. Her father taught nuclear physics at Indiana University. She graduated from the Madeira School in Virginia before earning a bachelor’s degree in economics from Bryn Mawr College in 1952. She got a master’s and a doctorate in the same subject at Harvard University’s Radcliffe College.

She later taught at Harvard, as well as other schools including Georgetown University and George Washington University. She was awarded a MacArthur Foundation Prize in 1983 and was elected national president of the American Economic Association in 1986.

Her published work included “Caring for the Disabled Elderly: Who Will Pay?” and “Reviving the American Dream,” studies published by Brookings. In the latter, she argued that the budget deficit was “the biggest single impediment” to reviving an under-performing U.S. economy. She called her views those of a “fanatical, card-carrying middle-of-the-roader.”

She married Lewis Rivlin, a Justice Department attorney in 1955. They divorced in 1977, after having two sons, Allan and Douglas, and a daughter, Catherine. She married Sidney Winter, an economics professor, in 1989.