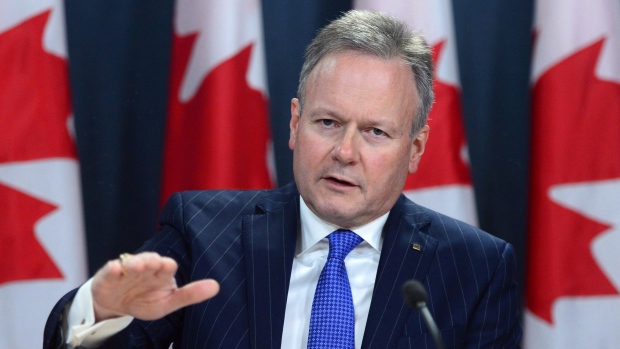 Bank of Canada governor Stephen Poloz holds a news conference at the National Press Theatre in Ottawa on Thursday, Dec 15, 2016 , The Canadian Press

The Bank of Canada did precisely what the market anticipated Wednesday by keeping its benchmark lending rate unchanged at 0.5 per cent. The Bank also raised its 2017 GDP forecast to 2.6 per cent from 2.1 per cent, cautioned speculation is on the rise in Toronto’s housing market, and warned the risk of global protectionism is “the most important source of uncertainty facing the Canadian economy.”

Here’s some of the early reaction from economists:

"This latest policy statement just goes to show that the Bank of Canada isn’t in any mood to raise interest rates, partly because of fears of bursting the massive housing bubble."

"The growth outlook may be sunnier, but it seems to be all about the negatives for Governor Poloz. The statement accompanying today's decision attempted to throw cold water on discussions of the recent improvement in Canadian economic indicators."

"The Bank of Canada still leans towards a cup half empty view of the economy, despite that cup having filled up a fair bit in the last half year. ... An upturn in capital spending, and some momentum in exports, will be needed for a turn to a more hawkish tone, but it will also be easier for the Bank to start talking about rate hikes after a further hike or two from the Fed, which would prevent rate hikes in Canada from lifting the [loonie] materially."

“The commentary is neutral and less dovish than in March, though the Bank continuing to highlight elevated uncertainties reinforces that they are in no rush to move on rates.”

“…The Bank of Canada is impotent in its ability to actually stimulate credit. The only thing they are stimulating is the sub-prime market I believe where interest rates are still important. I do believe, however, there is still a need to raise interest rates slowly. That’s a part of the cue for this affordability crisis that we are seeing. We need that. And I think that waiting for too long will not be optimal.”