It’s the worst post-Thanksgiving performance for the S&P 500 since 1941, when President Franklin D. Roosevelt signed a bill to officially establish the fourth Thursday in November as a national holiday.

The Russell 2000 sank 3.7 per cent and the Nasdaq 100 was dragged to its lowest close in a little more than two weeks. Travel and leisure stocks tumbled, while stay-at-home shares gained. In Europe, the Stoxx 600 closed down 3.7 per cent, the most since June 2020. Oil fell through US$70 a barrel in New York for the first time since late September.

Treasuries jumped on haven bids, sending the 10-year yield down the most since March 2020 on a closing basis, while traders pushed back bets on the Federal Reserve hiking rates. The Japanese yen emerged as the main haven currency of the day, with the dollar falling.

The World Health Organization and scientists in South Africa were said to be working “at lightning speed” to ascertain how quickly the B.1.1.529 variant can spread and whether it’s resistant to vaccines. The new threat adds to the wall of worry investors are already contending with in the form of elevated inflation, monetary tightening and slowing growth.

“This is not trivial,” said Jay Hatfield, chief executive and founder of Infrastructure Capital Management. “So it makes sense for people to rebalance because there’s tons of uncertainty and that’s never good for buying stocks.” 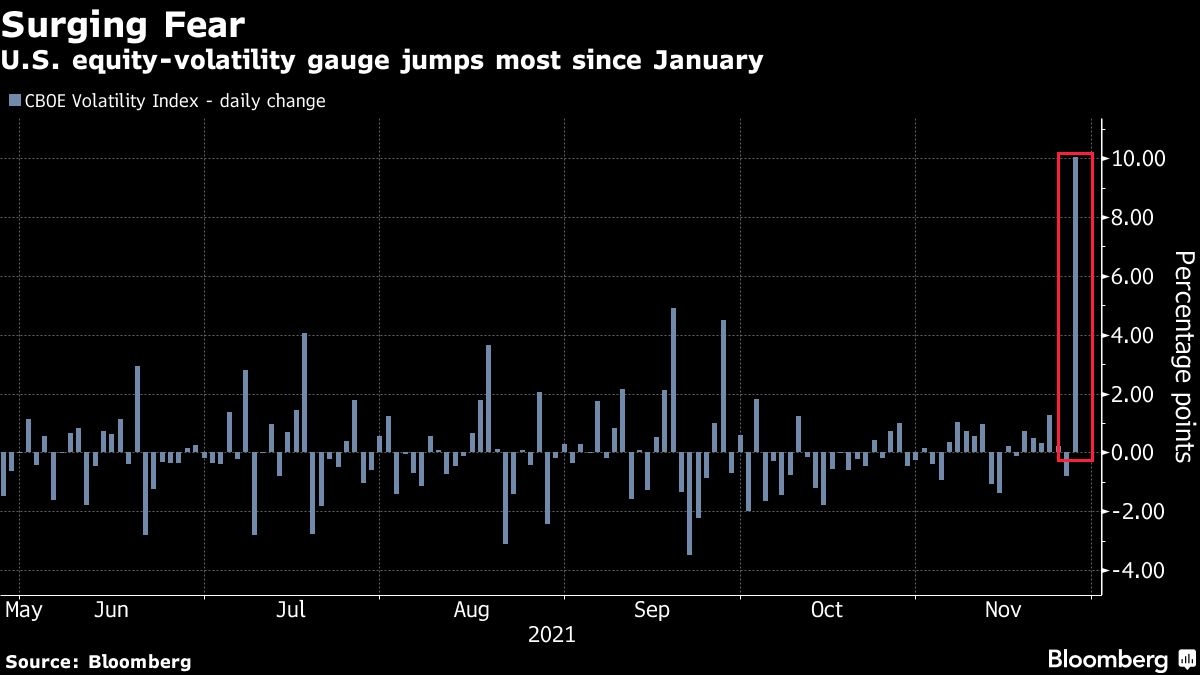 “It’s terrible news,” Ipek Ozkardeskaya, a senior analyst at Swissquote, said in emailed comments. “The new COVID variant could hit the economic recovery, but this time, the central banks won’t have enough margin to act. They can’t fight inflation and boost growth at the same time. They have to choose.”

The selloff comes after global markets adopted a Jekyll-and-Hyde posture for months, with equities rallying to newer records even as concerns intensified over a toxic combination of high inflation and slower growth. Investors poured almost US$900 billion into equity exchange-traded and long-only funds in 2021 -- exceeding the combined total from the past 19 years.

“At these valuations any sort of headline is going to cause this pullback,” Brian Vendig, MJP Wealth Advisors President, said in an interview with Bloomberg TV. “You definitely don’t want to be 100 per cent in risk assets -- whether its interest rate risk, inflation risk, policy risk and now another cue for the health-care crisis letting us all know we’re not out of the pandemic.”

Traders pushed back the expected timing of a first 25-basis-point rate increase by the Federal Reserve to September from June, while briefly pricing out any more hikes unit 2023. The rally in Treasuries pushed the 10-year yield down 16 basis points to close around 1.47 per cent, its largest single-session decline since March 2020.

They also bet on less than a 10-basis-point hike by the Bank of England next month, compared with 35 basis points projected a month ago. They called for seven basis points of tightening by the European Central Bank by December 2022 as against nine basis points seen Thursday.

The yen and Swiss franc found bids from safety-conscious traders, while the dollar posted a modest loss. A gain for the euro, the biggest component of the Bloomberg Dollar Spot Index, also curbed the greenback.

MSCI Inc.’s Asia-Pacific equity gauge slid to the lowest since early October. Some of the worst-hit assets were in emerging markets. The currency of South Africa, where the virus strain was identified, lost 1.8 per cent and the Turkish lira dropped 2.9 per cent.

While the selling continued unabated, some investors said it’s important not to get carried away by short-term jitters.

“We must not forget the backdrop that this was a market that was headed towards another 25 per cent year,” said Cate Faddis, Grace Capital President. “When the market gets ahead of itself it finds a reason, any reason to come back down to earth. A 2 per cent move is not very significant in light of the year we have had.”