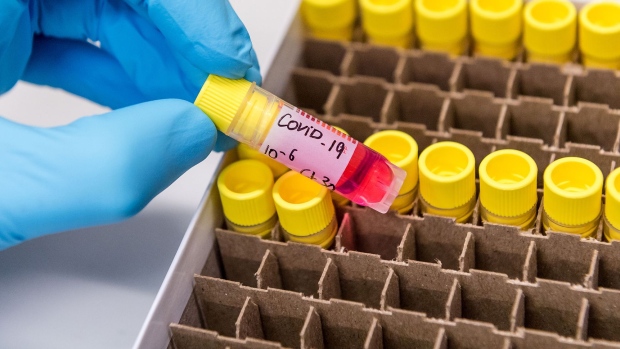 The U.S. strategy to rely on vaccines and treatments, rather than emphasizing social distancing, masks and testing nationwide, threatens to delay the return to normal life for Americans.

While the U.S. has committed more than US$10 billion to develop new shots to fight COVID-19, about half of Americans say they are wary of taking them, according to a Gallup poll reported this month. Meanwhile, any shortfalls in the vaccine program could mean the country will struggle with the virus well into 2023, according to the London-based firm Airfinity Ltd.

At the same time, cases are climbing as the weather cools and more activity moves indoors. Hospitalizations have risen at least 10 per cent in the past week in 32 U.S. states and the nation’s capital.

A health worker injects a woman during clinical trials for a COVID-19 vaccine at Research Centers of America in Hollywood, Florida, U.S., on Wednesday, Sept. 9, 2020. Drugmakers racing to produce COVID-19 vaccines pledged to avoid shortcuts on science as they face pressure to rush a shot to market.

Other parts of the world are also in trouble. Some European countries are seeing more new infections each day than in the dismal spring outbreak. But those regions are considering re-instituting containment measures that have become anathema in the U.S. Parts of Asia, meanwhile, seem poised to recover faster.

In the waning days before the U.S. election, the Trump administration’s response is focused on a swift roll-out of vaccines developed in its Operation Warp Speed program. On Sunday, Mark Meadows, Trump’s chief of staff, outlined the strategy on CNN.

But ending the crisis won’t be quick or easy. Vaccines may initially slow deaths among those with chronic conditions. But the logistical, production and public education challenges of immunizing 60 per cent to 70 per cent of national populations -- the level the World Health Organization says is needed to achieve herd immunity -- will be a time-consuming and troublesome process. The world will still need masks, social distancing, widespread testing and effective new therapies to keep the virus at bay, public-health specialists say.

A vaccine isn’t “a magic wand,” said Marie-Paule Kieny, a research director at the French health-science institute Inserm and a former World Health Organization official. “It will not be a quick fix, even if it’s effective.”

The first to be vaccinated in most areas will be health-care workers and those at risk due to age or physical condition. But that likely won’t slow broader national infection rates, “particularly if transmission is being sustained by younger people,” said David Salisbury, of the global health program at Chatham House, the London-based think tank.

The pandemic’s risk will only disappear “when you can vaccinate whole populations,” according to Salisbury, who previously served as the U.K. health department’s director of immunizations.

Front-runners Pfizer Inc., Moderna Inc. and AstraZeneca Plc all may deliver positive results in the coming weeks from final-stage trials, with emergency clearance possible by the end of the year and full-blown roll-outs taking longer. Meanwhile, U.S. regulators are only demanding 50 per cent effectiveness for emergency authorization, which may spur drawbacks combined with limited uptake.

“The less it is effective, the more we need people to take it,” said Brian Castrucci, chief executive of the Maryland-based de Beaumont Foundation in a recent interview. “We just don’t know yet.”

A wealthy U.S. could have an edge in getting COVID shots out more quickly and widely because of its early moves to snatch up doses. But a lot of things have to go right for a speedy vaccine roll-out to bear fruit.

To quell the virus by mid-July of 2021, the government would need all six vaccines purchased in advance to succeed, and it would need to obtain all of the optional extra allocations baked into those deals as well, according to Airfinity.

If just four of the vaccines are approved, and production and supply are 20 per cent lower then expected, the U.S. could see delays in arresting the virus that run into the second quarter of 2023, Airfinity found.

The U.S. reported 66,662 new COVID-19 cases Monday, bringing the seven-day average to a new high of 69,950, according to Johns Hopkins University. Overall, more than 225,000 Americans have died in the pandemic.

Even with a vaccine, “it’s hard to imagine a time when we’re not going to be watching a ticker that says this is how many COVID cases there are,” said Holden Thorp, editor in chief of the Science family of journals. “It’s going to be out there for quite some time.”

In some countries, the number of people willing to take a COVID vaccine is much higher. In China, for instance, 97 per cent of adults questioned in a World Economic Forum-Ipsos survey responded that they would strongly or somewhat agree that they should get vaccinated.

With a caseload that’s remained below 100 a day since mid-August, China has used its state power to largely crush the virus with testing campaigns that screened millions of citizens within weeks, 14-day quarantines for travelers from abroad, and mandates on public mask-wearing and contact-tracing.

In July, China authorized emergency use of three vaccines developed inside the country for front-line workers, including medical staff and border officials. The government then broadened its program to include employees of state-owned companies, and is now considering offering shots to students heading overseas. The expansion has been widely criticized by experts elsewhere, with some saying it was a dangerous misuse of the program.

In other parts of the world, the public is far more skeptical. Overall, just 74 per cent of the 20,000 adults in the World Economic Forum-Ipsos survey said they were willing to get the vaccine. Hungary and Poland were at 56 per cent in the survey. The main reasons cited by the skeptics: Worries about side effects and effectiveness.

The same concerns are circulating widely among Americans, including many who in the past have generally supported vaccines.

Members and outside researchers at an Oct. 22 meeting of the Food and Drug Administration’s vaccine advisory panel strongly questioned whether the FDA’s standards -- two months of safety data and a 50 per cent efficacy level -- were high enough to warrant emergency authorization.

Others at the meeting worried that if a quickly approved vaccine has safety problems later, or is less effective than promised, it could undermine public confidence in COVID vaccines for years to come.

“Any new vaccine must meet the FDA’s rigorous standards for quality, safety, and efficacy and will be verified in consultation with the independent experts of the vaccine advisory committee, which previously advised FDA on preventive vaccines for pneumonia, HPV, and hepatitis,” Michael Bars, a White House spokesman, said in an email.

Sam Fazeli, an analyst for Bloomberg Intelligence, suggests a quick approval based on limited data could have another negative aspect, as well. “It jeopardizes recruitment into other trials where the vaccines might be even better,” Fazeli said.

Impact on the U.S. and European economies, meanwhile, will continue to be enormous as the vaccine push plays out.

Writing in the Journal of the American Medical Association, former U.S. Treasury Secretary Lawrence Summers and fellow Harvard University economist David Cutler estimated that the total cost of the pandemic to the U.S. is already more than US$16 trillion. About half of that is related to lost gross domestic product as a result of economic shutdowns and the rest is from health losses.

Oscar Munoz, chairman at United Airlines Holdings Inc., said this month he doesn’t see air travel returning to normal until around 2024. While the number of passengers returning to the skies has risen in recent months, it is still a fraction of the levels seen prior to the onset of the global pandemic.

Ann McGuire is manager of the Norwood Sport Center, a candlepin bowling alley about 20 miles from Boston. Most of her best customers were seniors, she said, and the leagues they played in, which provided most of her income, have all left and haven’t returned. The pandemic “is killing us,” she said.

While she’s hopeful a vaccine can help, she isn’t sure how popular it will be. “I don’t know how many people are going to want to try it,” McGuire said. “It can take years before they see anything negative.”

McGuire is no anti-vaxxer. Her mother had polio and insisted she get every vaccine that came out. Still, she said, “I think I will wait awhile” before taking the earliest vaccines. In the meantime, she wants people to keep using masks and social distancing.

Down the road in Norwood, Anthony Ventresca, of Billerica, Massachusetts, was headed for a doctor’s appointment. Wearing a bright red Trump 2020 hat, he too said he wouldn’t be in a rush to take a vaccine. Once one is approved, however, he thinks mask-wearing and social distancing should end.

“If people are getting vaccinated then there would be no sense,” he said.

The dueling viewpoints highlight a key facet of American culture that makes national acceptance for any vaccine difficult, said Trevor Pinch, a professor of science and technology studies at Cornell University in upstate New York.

“This is very much the problem with vaccines in the U.S.,” Pinch said. “There’s always been that strong tension between the good of the group and what’s best for the individual.”

Still, Pinch believes there are measures that a second-term Trump administration, or a newly-elected Joe Biden team, can use to keep things moving in a positive way.

He noted the effectiveness of a picture of Elvis Presley getting a polio shot in 1956 that ran in hundreds of U.S. newspapers, and was widely credited with pushing the vaccine to young adults and teenagers. The government should quickly create a major marketing campaign with well-known people in all walks of life for any successful vaccine, he said.

Public health communication on vaccination starts with tapping respected community leaders including local government officials and churches, and paying attention to high-risk, under-served communities, said Harvey Fineberg, who’s both a former dean of the Harvard School of Public Health and ex-president of the U.S. National Academy of Sciences.

There’s no “single magical solution,” said Fineberg, now president of the Gordon and Betty Moore Foundation. “It’s a multi-pronged reinforcement strategy that has a grass-roots component, and makes it easy for people to do the right thing.”

Along with marketing a vaccine, the challenges of producing it in mass quantities, and then transporting and dispensing it are enormous, particularly given that some need to be ultra-cold when stores and require complex handling to remain viable.

Getting them to patients will take some 15 million cooling boxes, 200,000 pallet shipments and 15,000 flights, according to the international shipping service DHL Worldwide Express.

Meanwhile, Europe took a step closer to the strict rules imposed during the initial wave of the pandemic.

Italy introduced its strongest virus restrictions since the end of a lockdown in May, and Spain will impose new measures, including a nationwide curfew. Germany is planning to discuss its next steps when Chancellor Angela Merkel convenes her crisis task force this week. France reported a record of 52,010 new cases on Sunday, taking the total to 1.18 million, the fifth-highest in the world.

For some businesses, how to reopen in a safe way -- and reassure customers -- amid an ongoing pandemic and an uncertain vaccine roll-out is just as frightening as dealing with the initial lockdowns.

In pre-pandemic Berlin, nightlife tourists pumped some US$1.75 billion a year into the city’s economy. Now 30 million euros in government subsidies are what’s keeping most venues afloat, at least until the end of this year.

“We’re all down to skin and bones,” said Pamela Schobess, owner of Club Gretchen in Berlin and chairwoman of the local Club Commission industry group. “Once we can get moving again, we definitely won’t be able to go from zero to 100 quickly.”

The idea of a vaccine would be great if it “proved to be effective and lots of people were willing to have it,” he said. “But I’m not holding out hope or optimistic about that.”