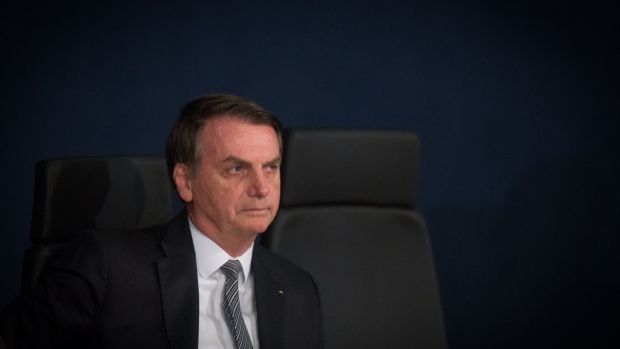 During his first year on the job, Bolsonaro assiduously courted the American president, parroting his hard-line policies on Venezuela and Hezbollah while breaking with diplomatic protocol by predicting a Trump victory in 2020 during a visit to the White House.

Yet his all-in bet on Trump is quickly souring as signs mount that the alliance isn’t delivering real benefits to Brazil.

Trump’s announcement Monday that he is reinstating tariffs on steel and aluminum from Brazil and Argentina follows a decision by the White House in late August to give priority to Romania and Argentina’s bids to join the Organization for Economic Cooperation and Development despite public reassurances in favor of Brazil, Latin America’s largest economy.

Bolsonaro’s inability to get a clear diplomatic victory, at least so far, from his robust support of Trump raises questions about his decision to shift Brazil’s foreign policy. It also weakens him domestically by giving ammunition to rivals who warned against joining forces with someone they see as an unreliable partner.

“In international relations there are no friends, only interests,” Rodrigo Maia, Brazil’s lower house speaker and a centrist who has criticized Bolsonaro’s foreign policy, told Bloomberg News on Monday. “Trump is defending Americans and we need to defend Brazilians.”

Trump on Monday accused Argentina and Brazil of cheapening their currencies to the detriment of U.S. farmers, arguing that the two countries were “presiding over a massive devaluation of their currencies.”

The two nations have taken advantage of the trade war to become alternative suppliers of soybeans and other agricultural products to China, grabbing market share away from U.S. farmers.

Argentina’s peso has plunged this year, especially after it became clear that President Mauricio Macri would likely lose the October election to Alberto Fernandez, the left-learning candidate. The country seems headed for a third consecutive year of economic contraction.

Brazil has intervened multiple times in the past month to support its devaluing real. Argentina has also tried to bolster the falling peso.

Bolsonaro said he would talk to his economy minister before reacting to Trump’s comments on the Brazilian real and the imposition of the tariffs. “If needed, I can also talk to Trump, I have an open channel with him,” he added.

But the tariffs threats underscored the lack of clear results to show for all the Bolsonaro-Trump romance. For instance, a much-touted trade deal with the U.S. has failed to gain traction despite Bolsonaro publicly praising Trump at every turn.

The U.S. has ranked first as a destination for Brazilian steel exports for most of the last decade. In 2018, exports by volume to the U.S. increased by 17%, when compared to 2017.

Brazil, historically a cautious U.S. ally, threw in its lot with Trump since Bolsonaro took office in January and railed against leftist ideologies and globalist institutions. That was a marked shift from the country’s traditional, internationalist approach, which sought to amplify its influence through regional alliances and multilateral organizations like the United Nations.

Yet Bolsonaro’s enthusiastic alignment with Trump, together with his clashes with world leaders such as French President Emmanuel Macron as well as Fernandez, have left his nation increasingly alone in the world stage, a trend underscored by a recent vote at the United Nations where it was one of two countries siding with the U.S. against 187 members on the Cuban embargo.

Brazilian diplomats, speaking on condition of anonymity, downplayed Trump’s tweets, arguing the scope and size of the tariffs are unknown and that their implementation isn’t certain. They also argued his claims are inaccurate as Brazil has a free-floating currency regime and works hard against exchange rate depreciation.

A U.S. official stressed that the government still supports the OECD bid and that ties with Brazil have blossomed under Trump and Bolsonaro. The official, who asked not to be identified discussing bilateral ties, said the U.S. is still very much interested in advancing a free trade agreement.

Officials at the White House didn’t immediately respond to a request for comment on whether the president’s tariff decisions undermine the relationship he and Bolsonaro have sought to establish.

In the meantime, China, Brazil’s largest trading partner, has been quietly working to deepen economic ties.

Facing an onslaught of pressure from his generals, the agriculture lobby, and other policy makers, Bolsonaro, who early on had accused China of predatory business practices, has without fanfare shifted his stance even before Trump’s tariff threat. During a visit to Beijing in October, he said the two countries “were born to walk together”. He later received President Xi Jinping at a BRICs summit in Brasilia, where he called for deeper trade relations.

The possibility that Trump loses his re-election bid next year is another reason for the Bolsonaro administration to be more careful about the association, said Roberto Simon, senior director for policy at Americas Society/Council of the Americas.

“I really can’t think of any way in which this partnership with Trump has benefited Brazil,” he said. “It’s leading to the gradual undermining of Brazil’s credibility internationally. If Trump loses, Brazil could become an international pariah.”

Here’s what Trump has gotten from closer ties with Bolsonaro:

Here’s what Bolsonaro has gotten in return:

To contact the reporters on this story: David Wainer in New York at dwainer3@bloomberg.net;Samy Adghirni in Brasilia Newsroom at sadghirni@bloomberg.net

To contact the editors responsible for this story: Bill Faries at wfaries@bloomberg.net, ;Juan Pablo Spinetto at jspinetto@bloomberg.net, John Harney