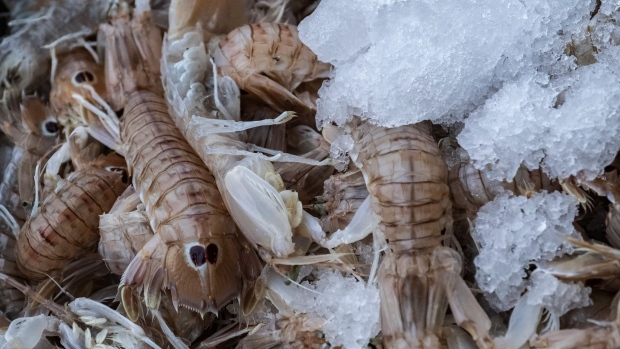 Freshly caught shrimp on ice ahead of auction in Sete, France, on Tuesday, Dec. 1, 2020. Boris Johnson’s officials believe a Brexit trade deal could be reached within days if both sides continue working in “good faith” to resolve what the U.K. sees as the last big obstacle in the talks -- fishing rights. , Bloomberg

(Bloomberg) -- As the goal to stamp out coronavirus infection becomes harder to reach, with more transmissible variants and a world awash with the pathogen, mainland China and Hong Kong are pointing to a wide range of non-human routes as potential evaders of their strict control measures.

The crackdowns, which range from parcels to fish and four-legged pets, come despite experts outside of China warning such methods of transmission are unproven and unlikely.

“It seems to be a shorthand for blaming foreign sources for the origin of the outbreak, rather than attributing it to the virus evading the protocols set up to detect infections,” Nicholas Thomas, an associate professor in health security at the City University of Hong Kong. “The reality is that Covid -- especially the delta and omicron variants -- are now present in all the countries on China’s borders. Either via imported cases arriving at airports or sea ports, or simply by people crossing China’s borders, the virus is going to get into China.”

Here’s a list of what’s been targeted in the Covid Zero push:

International mail came under the spotlight after after Beijing’s first omicron infection was found in a woman who received post from Canada. The letter, which had passed through the U.S. and Hong Kong, tested positive for a similar strain previously found in North America and Singapore, according to health officials.

The patient has spread the virus to two close contact and concerns about a flareup in the capital just weeks before the Winter Olympics prompted a warning from a city official that residents should minimize international purchases and disinfect packages.

An office building near the Beijing Capital International Airport was sealed off on Tuesday after the government said contaminated mail from abroad had arrived. More than 1,000 people were unable to leave until their Covid tests and environmental samples came back negative.

In Hong Kong, hamsters are being investigated as a possible source of a surprise delta-variant case in a pet-shop worker and potentially a rare example of animal-to-human transmission. Nearly a dozen of the rodents imported from the Netherlands were found to be infected with the virulent strain and samples from the shop’s warehouse in another part of the city also showed traces of the virus.

The government ordered more than 100 customers into quarantine and will cull about 2,000 small animals, including hamsters, chinchillas and rabbits. Authorities also suspended imports of those creatures, ordered stores selling hamsters to shut immediately and asked anyone who had recently bought a hamster to turn them over to be destroyed.

Earlier this month, three cities in China’s eastern province of Zhejiang asked anyone who had bought Vietnamese dragonfruit from certain shops to report to local governments and take Covid tests after packaging from fruit imported in December tested weakly positive for the virus.

Provinces including Shandong and Jiangsu enacted similar measures after finding Covid at a number of small local fruit shops, shutting down sellers and putting some people into quarantine. A few local governments subsequently suspended the processing and delivery of imported fruit and cold chain products.

Imported Chilean cherries also drew scrutiny after a small county in Henan detected the virus on the fruit. No one was found to be infected, while local authorities discouraged unnecessary purchases of imported products and urged packages to be disinfected thoroughly before being brought into homes.

Authorities in China’s southern technology hub of Shenzhen warned consumers in August 2020 to exercise caution when purchasing imported frozen food after Brazilian chicken wings tested positive for coronavirus. The sample appeared to have been taken from the surface of the meat, rather than external packaging.

Local authorities tested related products and people who might have come into contact with the meat, with all returning negative results. Residents were asked to be cautious when purchasing frozen meat and seafood products to reduce the risk of infection.

Multiple samples taken from the packages of imported shrimp tested positive in July of 2020, prompting China to question whether the virus could be transmitted through frozen products.

A number of supermarket chains suspended the sale of Ecuadorian shrimp amid consumer suspicion of the supply chain, and the incident drove the price of the crustacean to a five-year low in Guangdong.

In August 2020, packaging of frozen shrimp brought in from Ecuador tested positive in Anhui, where regular testing targeted cold-food chains and workers. The wholesale supplier and workers at the restaurant where the contaminated seafood was found, along with their families, tested negative for coronavirus.

Scandinavian fish was one of the first items China blamed for virus transmission. Norwegian salmon was initially linked to an outbreak in Beijing in June 2020 after a cluster of over 300 infections was traced to a chopping board used by a seller of the fish.

Later that month, China agreed with global experts that it was unlikely food trade was responsible for the cases and the country’s customs administration said it wouldn’t impose any restrictions on imports.

After three workers at a children’s clothing producer in the Hebei were infected with the virus, authorities more than 1,200 miles away ordered people who had received -- or even just handled -- packages from the company to get tested.

About 300 packages were tested in Hebei in November, with all tests coming back negative.