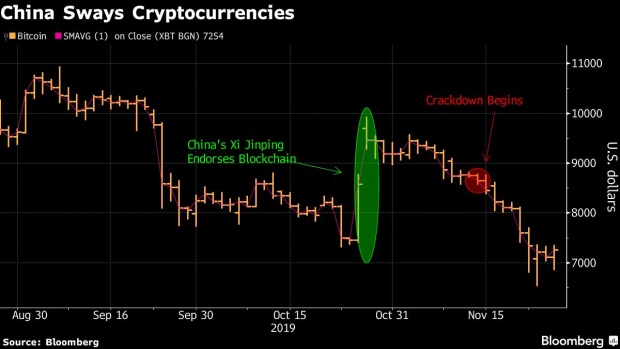 At least five local exchanges have halted operations or announced they will no longer serve domestic users this month, after regulators issued a series of warnings and notices as part of a cleanup of digital currency trading.

China’s stepping up scrutiny of its massive cryptocurrency industry just weeks after President Xi Jinping ignited a market frenzy by declaring Beijing’s support for blockchain technology. Financial watchdogs including the Chinese central bank have in past weeks ordered crypto firms to shutter and warned investors to be wary of digital currencies, seeking to rein in a market prone to excesses. Weibo, a Chinese Twitter suspended accounts operated by major exchange Binance Holdings Ltd. and blockchain platform Tron.

Taken together, the latest wave of shutdowns and restrictions represent the biggest cleanup of the sector since an initial Chinese clampdown in September 2017. Although exchanges that allow users to buy Bitcoin and Ether with fiat money were banned, trading had remained rampant in China through over-the-counter platforms or services that deal with crypto assets only. Now, even those alternatives have succumbed to regulators, spooking investors. Bitcoin sank to its lowest level in six months at the end of an 11-day losing streak -- the longest since at least 2010.

Twenty of the top 50 crypto exchanges are based in the Asia-Pacific region and accounted for about 40% of Bitcoin transactions in the first half of the year, according to data from Chainalysis. Within the region, the most exchanges are in China, the research firm found.

Aaron Hu, a 26-year-old computer engineer in the central Chinese city of Changsha , said he moved all the crypto he holds -- several million yuan’s worth -- from exchanges like Binance and OKEx to his own wallet address. “The first thing I thought of is how to secure my assets,” he said.

Last week, Chinese exchange operators Bitsoda and Akdex announced termination of service. Rival Biss said this month it’s halted operations while executives cooperate with a government probe. Btuex said on Monday it will shut in response to Chinese government orders, reopening in future to serve only overseas users. And Idax said on Sunday it will also no longer serve users in China but focus on users abroad, citing policy reasons.

“It appears that, like everything else within their borders, China feels it needs to have tighter controls on the crypto market including exchanges, miners and asset issuers,” said Katie Talati, head of research at Arca, a Los Angeles-based asset manager that invests in cryptocurrencies. “I do believe, however, they are moving in a similar direction as Japan and other jurisdictions that have tight and clear regulations for crypto businesses.”

For now, uncertainty over how deep the apparent crackdown will run has spurred traders to transfer their money to safer places. One of crypto’s largest wallet apps, ImToken, said Tether transactions among its nearly 10 million users surged to $66 million on Nov. 22, the day China’s central bank issued its latest warning against crypto trading. That’s more than double the app’s average daily Tether transaction in October, the IDG-backed startup told Bloomberg News. Tether, a so-called stable coin pegged to U.S. dollars, is a popular vehicle for investors to move their money into and out of crypto coins.

“The current situation and environment for blockchain in China is still very positive,” Tron founder and crypto entrepreneur Justin Sun said. “In the short term, it may not get as much progress as we’d expect.”

Here’s a timeline of the recent developments from China that’s been blamed for the plunge:

To contact the reporters on this story: Zheping Huang in Hong Kong at zhuang245@bloomberg.net;Olga Kharif in Portland at okharif@bloomberg.net

To contact the editors responsible for this story: Joanna Ossinger at jossinger@bloomberg.net, ;Jeremy Herron at jherron8@bloomberg.net, Edwin Chan, Dave Liedtka