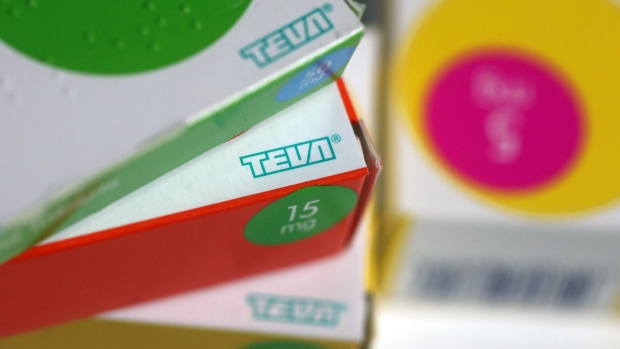 Boxes of tablets, produced by Teva Pharmaceutical Industries Ltd., sit on a pharmacy counter in this arranged photograph in London. , Bloomberg

(Bloomberg) -- Allergan Plc agreed to pay $200 million to settle a New York lawsuit over the marketing of highly addictive opioid painkillers, leaving Teva Pharmaceutical Industries Ltd. as the lone defendant remaining in a public-nuisance trial that is wrapping up after six months of testimony.

Allergan, acquired by rival drugmaker AbbVie Inc. last year, will pay the money by 2022 and the majority of it is slated to help replenish drug-treatment and social-service budgets depleted by the opioid epidemic, New York Attorney General Letitia James said in a statement. Allergan also agreed earlier to stop making opioids.

“While no amount of money will ever make up for the thousands who lost their lives or became addicted to opioids across our state, these funds will be used to prevent future devastation,” James said Wednesday in a statement.

The settlement also resolves claims by two Long Island counties, Nassau and Suffolk, which contended that Allergan’s misleading marketing of its opioid-based Actiq and Fentora painkillers led to waves of fatal overdoses and deaths.

The claims by New York are among thousands filed by states, municipalities and Native American tribes across the country seeking billions of dollars from opioid makers, distributors and pharmacies over their alleged roles in fueling the U.S. opioid crisis.

“The settlement will provide up to $200 million to address opioid-related issues, as well as reimburse attorneys’ fees and costs that specifically account for the advanced stage of this trial,” the company said in an emailed statement. “Allergan previously made the decision to voluntarily discontinue its branded prescription opioid business, which had a minimal market share of less than 1% of nationwide prescriptions.”

A trial over claims by the state and the counties began in June with more than 20 companies as defendants. That’s been whittled to just Teva and its Anda Inc. unit after settlements were reached drug makers including Johnson & Johnson and Endo International Plc, along with drugstore chains including Rite Aid Corp.

Closing arguments in the trial are slated to start later Wednesday.

Jurors must decide whether Teva and Anda created a so-called “public nuisance” through their opioid marketing and must pay the state and municipalities more than $1 billion for the havoc wreaked by the drugs over the last two decades.

On Tuesday, jurors got a glimpse of some of Teva’s efforts to ramp up opioid sales when lawyers for the state and counties played an internal video based on a scene from the 1992 film “A Few Good Men.” It was made by Teva’s Cephalon unit in 2006 to promote its new opioid-based drug, Fentora, at a company-wide sales meeting.

Dressed in a Marine uniform, Roy Craig, a Cephalon sales manager, portrays Jack Nicholson’s character in the movie. “I have neither the time nor the inclination to explain ourselves to people who rise and sleep under the very blanket of revenue we provide and then question the manner in which we provide it,” Craig says on the video.

The state and municipalities said the video illustrates how the company put profit over safety in its opioid-marketing campaigns and linked bonuses to sales.

“These videos show the total lack of caring about consumers on the part of the company,” Hunter Shkolnik, a lawyer for one of the counties, said in a statement. “It was all about the bonuses.”

Teva officials had unsuccessfully sought to prevent the video from being shown, arguing that it created a “grave risk of a jury verdict based on a negative reaction to irrelevant videos rather than actual evidence.”

In a separate statement, Teva spokeswoman Kelley Dougherty said, “The events depicted in these 15-year-old Cephalon videos -- while inconsistent with the values and beliefs of Teva -- are irrelevant to the legal proceedings and in no way change the company’s defense in the litigation.”

The New York case is In Re Opioid Litigation, Index no. 40000/2017, Supreme Court of New York, Suffolk County.