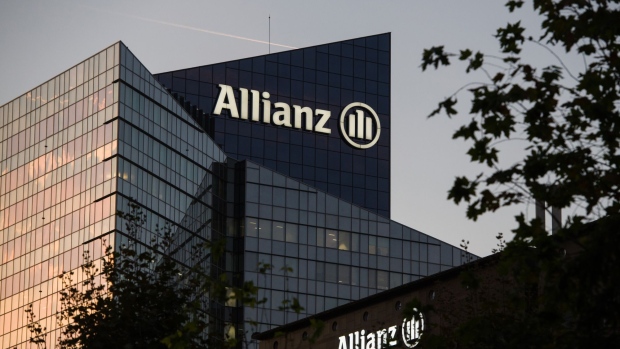 (Bloomberg) -- He was a hedge-fund manager supposedly under the watchful eye of a “master cop” -- an Allianz SE unit that policed his every move.

Instead, U.S. authorities say, Greg Tournant sold lies to investors that cost customers, and now Allianz, billions of dollars, and resulted in a guilty plea to federal charges of securities fraud by Allianz Global Investors US.

News on Tuesday that the U.S. unit of the German insurance giant was admitting guilt over the collapse of its Structured Alpha group of hedge funds leaves many questions unanswered, including a big one: Will Tournant, who’d told investors Structured Alpha would do well whether markets went up or down, end up in prison?

For Allianz, Tuesday’s development brought an end to legal headaches that have engulfed the German insurer since the funds imploded in March 2020, when financial markets reeled during the early days of the pandemic.

The demise of the Structured Alpha funds is just the latest illustration of the outsized damage an obscure trading operation can wreak on an A-list financial institution. Think Archegos, Long-Term Capital Management and the hedge funds whose collapse led to the demise of Bear Stearns.

Tournant, 55, now faces charges that are upending his career and could send him to prison for a decade or more if he’s convicted. Former colleagues have turned on him, as has Allianz.

Tournant turned himself in to authorities in Colorado, where he lives, and faces trial in federal court in New York. His attorneys said the charges are an “ill-considered attempt by the government to criminalize the impact of the unprecedented, COVID-induced market dislocation of March 2020.” While regrettable, the losses “are not the result of any crime,” they said.

Prosecutors say that while Tournant assured big investors safety was his top priority, he secretly took huge, undisclosed risks. The result was a massive fraud that cost investors $7 billion, they say.

Tournant, the chief investment officer at Miami-based Structured Alpha, spent years “smoothing” performance data, lying about hedges against market downturns, and pretending risk managers at Allianz Global Investors US were carefully monitoring his every move, prosecutors charged in an indictment.

Two of his top lieutenants, Stephen Bond-Nelson and Trevor Taylor, agreed to plead guilty and are cooperating with prosecutors. They face long prison terms but could get far less time for their cooperation. All three men were also sued by the Securities and Exchange Commission.

Read More: Allianz Cooperator Used Bathroom Break to Run Out on the SEC

Prosecutors and regulators revealed new details of how they say Tournant, Taylor, and Bond-Nelson duped investors, consultants, colleagues and auditors.

As star performers at Allianz Global Investors US, Tournant and Taylor each earned $51.3 million from 2016 to 2020 and Bond-Nelson made $12 million, according to the SEC.

The cooperation of Taylor and Bond-Nelson wasn’t assured. At one point Tournant met Taylor at a vacant construction site, where they discussed fund reports they manipulated and how to respond to SEC investigators, according to the SEC complaint.

Tournant also encouraged Bond-Nelson, 51, to give false testimony to the agency. Bond-Nelson lied repeatedly to SEC investigators during his testimony in May 2021 before taking a bathroom break and not returning. Soon, he “decided to cooperate and assist the SEC staff in understanding the Structured Alpha fraud,” according to the agency complaint.

The fund managers were not the only ones at fault. Allianz Global Investors US pleaded guilty to one count of securities fraud and agreed to pay about $6 billion to resolve the case. Prosecutors said the parent company played no role in the fraud and only learned of it after the pandemic hit.

Allianz spokesman John Wallace said Tournant and his two lieutenants engaged in “isolated but serious wrongdoing” that led the company to pay billions of dollars in settlements. “We are shocked by the actions of Greg Tournant and his former colleagues.”

Allianz SE on Tuesday announced plans to sell the bulk of the US piece of its Allianz Global Investors business to Voya Financial Inc.

Tournant’s group used equity-based options to market what he said was an all-weather strategy that would protect investors from losses in good times and bad. Those products would even turn a profit when markets went nowhere, according to product marketing materials.

In late 2015, Tournant allegedly grew frustrated with the cost of hedging, which was eating into returns. The fund “abandoned the promised hedging strategy and instead began to purchase cheaper hedges that were further out of the money, and therefore less protective in the event of a market crash,” according to the indictment. That change was not disclosed to investors, prosecutors allege.

While Tournant’s funds might have sounded too good to be true, Allianz Global Investors US assured clients that its risk-management system had “three lines of defense.” But prosecutors said it was barely functional.

Even when, in 2017, internal auditors uncovered red flags, they assigned product specialists whose pay was tied to the group’s performance to follow up.

Tournant and Taylor worked together well over a decade ago when they were at Structured Alpha’s predecessor, Options Management, which had a similar strategy. After that firm failed during the financial crisis, they regrouped and were eventually acquired by Allianz, with its global brand and vaunted internal controls.

Investing in Structured Alpha, Tournant assured investors, was “very, very different than if I had my own hedge fund firm where in some form or fashion I can overrule just about anything.”